You are here: Home » Articles filed under: 'News' » Article: 'QMN partners for Qld Women in STEM' 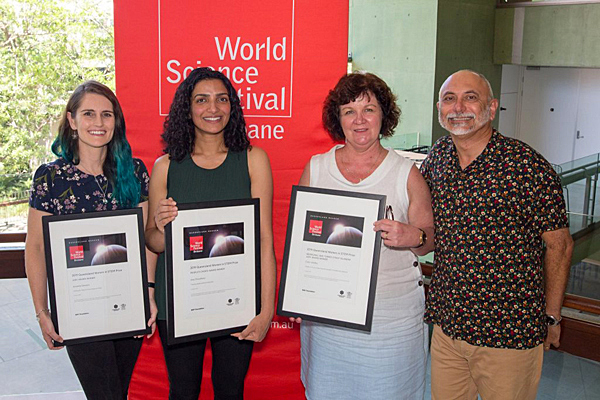 A researcher looking at how to tame weeds using gene-editing, a marine scientist investigating the impact of micro plastics on seafood and a First Nations researcher seeking to protect the eyesight of people with diabetes have been recognised for their contribution to Queensland science.

Amanda Dawson, Anu Choudray and Clare Villalba have today been named winners of the 2019 Queensland Women in STEM prize.

Speaking at the World Science Festival Brisbane today, Minister for Environment and Science Leeanne Enoch announced Amanda Dawson as the recipient of the Jury Award.

“Dr Dawson is seeking to assess if there is a risk of seafood acting as a source of micro plastics to humans. Micro plastics – plastic particles smaller than 5mm – are fast becoming one of the world’s most pervasive pollutants.

“This is an important study with implications for Queensland’s $272 million seafood industry.”

Also speaking at the awards, Minister for Women Di Farmer announced Anu Choudhary as the winner of the People’s Choice Award.

“Weeds are a significant issue for us in Queensland. They cost the state about $600 million annually, and have huge impacts on our primary industries, natural ecosystems and human and animal health,” Ms Farmer said.

“Dr Choudhary is using genetic technologies to help reduce the spread and impact of agricultural weeds.

“For example, switching off the seed-shedding trait in weeds can significantly reduce the number of seeds reaching the soil, thereby suppressing the overall weed population.”

This year, a new category recognising the work of First Nations women was established, thanks to a partnership with the BHP Foundation.

“There is no doubt that a diverse and inclusive workforce drawn from the widest range of backgrounds, perspectives and experiences is critical to maximising innovation and creativity, which is vital to us as a society and an economy in the 21st century,” Mr Ensor said.

Clare Villalba, a PhD student at QUT was the inaugural recipient of the Aboriginal and Torres Strait Islander Jury Award in recognition of her commitment to preventing diabetes-related blindness.

Every day 60 Queenslanders develop diabetes. This harrowing statistic is made all the more grim by the fact that diabetes is the leading cause of preventable blindness in our community. Aboriginal and Torres Strait Islander people are particularly vulnerable.

Ms Villalba has been working with the Inala Indigenous Health Service where together they are developing specialised, person-focussed eye checks to stop blindness for people with diabetes before it is too late.

Ms Enoch said the Queensland Women in STEM Prize highlighted the dedication of Queensland’s female scientists and their contribution to inspiring, and engaging with, the broader community about science.

“The Palaszczuk Government is committed to getting more women engaged in STEM, and this is what this prize is all about.

“We have amazing talent here in Queensland, and we want to inspire all girls and young women to consider a career in science, technology, engineering and maths.”

“The Queensland Women in STEM Prize highlights the dedication of Queensland’s women scientists, as well as their contribution to inspiring, and engaging with, the broader community about science,” Dr Thompson said.

“The World Science Festival Brisbane and the Queensland Women in STEM Prize provide valuable opportunities to celebrate the amazing achievements of women who are making a real difference in Queensland.”