You are here: Home » Articles filed under: 'News' » Article: 'QMN’s blog Connecting with the Collections'

QMN’s blog Connecting with the Collections 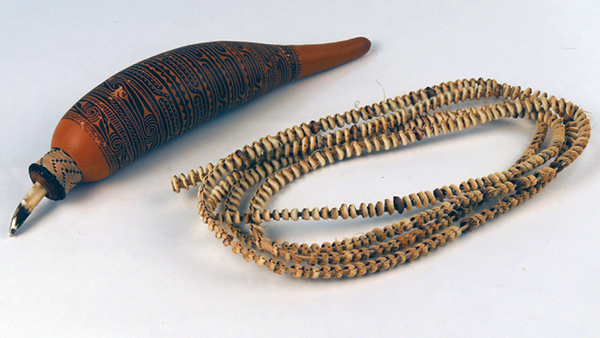 This blog post is part of an ongoing series titled Connecting with Collections. The series offers readers a peek inside the collections at Museum of Tropical Queensland, highlighting objects and their stories.

“I am giving you this gift – not to buy a bride – but to remember the Purpuruk Family and our beautiful Country.”

Between 1980 and 1984, Jenny Sebba and Arnold Young lived in Bougainville, Papua New Guinea, during which time Arnold ran the Steamships Trading Company, a premier trading company based in Papua New Guinea.

Upon their departure, the Tolai community in Keita gifted two items to Jenny and Arnold.

Alongside the national currency, Kina, the Tolai people of the Gazelle Peninsula maintain a traditional currency of shell money, or tabu.

Tabu is sacred currency. While it is used occasionally to buy tangible items, such as goods and perishables, its primary value is in cultural exchange and it has significant use in Tolai society and ceremonial practice.

“Shellmoney is a very important part of TOLAI tradition, and is still being used today in our way of life –

when a baby is born,

a bride leaves her family for a new home,

when a man dies,

also to solve disputes and quarrels,

so shell money is still more important than anything money can buy.”

–Detuei Purpuruk, in a letter addressed to Arnold and Jenny Sebba, November 1984 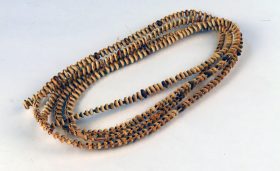 The standard unit of tabu currency is one param – a string roughly the length of an adult’s arm span, featuring approximately 300 shells.

Tabu is made from nassariidae shells, collected from the shore or sea floor before being dried in the sun. Once the top of the shell – with the curve – has been removed with pliers, the flattened pieces are threaded onto strips of rattan. 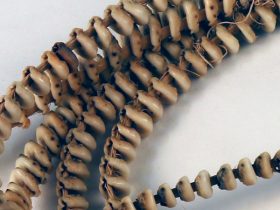 Along with the tabu, Jenny and Arnold were gifted a Sel Kambang – a lime container.

“Throughout coastal regions of Papua New Guinea sel kambang has been an important, valuable form of native money which was kept by the elders of the clans who were chosen as leaders to look after the community and the people.

Whenever an argument arose with in the community, the elder would step up and break the valuable sel kambang in front of the people so that they would learn a lesson when their valuable thing was seen, being smashed to dust.”

This sel kambang is ceremonial version of a lime container, made from a gourd and used to store lime powder for betel-nut chewing. Tolai people partake in betel-nut chewing practices for ritualistic purposes and everyday use.

Traditionally, lime powder (crushed shell or coral) is stored in the container, removed with a lime spatula, and then consumed while chewing betel-nut. The narcotic stimulant of the betel-nut is more effectively released alongside small quantities of lime powder. 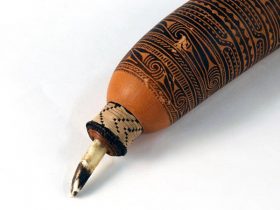 The stopper is wrapped in plant fibre, with a pig tusk attached on the end.

Jenny Sebba donated these two items to the Museum of Tropical Queensland, to become part of the State Collection. These items are featured on the Online Collection on the Museum at Home website.