With the COVID-19 pandemic at the forefront of the news and minds of most Australians, it can be easy to forget that only two years ago, Australia was dealing with one of the deadliest bushfire seasons in Australian history. A collection of 41 posters in the Queensland Museum collection documents the artistic community’s response to the 2019–2020 Bushfire Emergency.

The 2019–2020 bushfires, known as Australia’s Black Summer, devastated the residents, primary producers and unique ecosystems of Queensland, with more than 7 million hectares burnt across the state. (1) As homes and livelihoods were lost, communities demanded immediate and decisive action on the climate crisis.

In February 2020, under the collective name Bushfire Brandalism, 41 Australian artists replaced advertising posters across Brisbane, Sydney and Melbourne with subversive posters speaking to the Australian government’s inaction on climate change. The artists (some of whom chose to remain anonymous) wore high visibility vests printed with JCDecaux branding which allowed them to operate in plain sight. The posters were printed by Collingwood print studio Milkbar and featured at local bus stops and other outdoor advertising spaces. You might have noticed the provocative images featuring slogans like ‘Carbon Aussie, Carbon’ and ‘Climate Action Now’ on your morning commute. 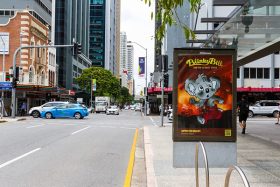 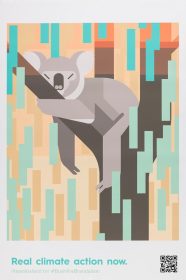 The unsanctioned art campaign was ‘a direct reaction to the feelings of hopelessness and powerlessness experienced nationwide’ and aimed to ‘reclaim public advertising space’ by making environmental issues such as the destructive effects of the fossil fuel industry visible in public spaces and the media. (2) QR codes on each poster provided audiences with information on the issues presented and links to not-for-profit organisations combating climate change.

The environmental impact of the 2019–2020 Australian bushfires was immense, with more than 400 million tonnes of carbon dioxide emitted into the atmosphere and an estimated three billion animals killed or displaced nationwide. (3) The destruction of essential habitats was especially felt in Queensland, Australia’s most naturally diverse state. Thirty-nine injured koalas were treated by the South-East Queensland Wildlife Hospital Network, with many more lost. (4) Several Bushfire Brandalism artists such as Amok Island, Blends and David Booth featured koalas, then listed as a vulnerable species in Queensland, in their work. Koalas have since been reclassified as endangered in Queensland and New South Wales, meaning the species is at high risk of extinction in the short term. The impact of drought, disease, urbanisation and habitat loss were compounded by the 2019–2020 Australian bushfires, which many felt were exacerbated by the effects of climate change. 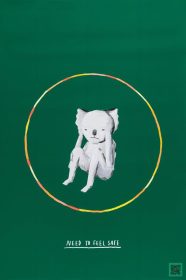 Artists Lotte Alexis Smith and Stanislava Pinchuk highlighted bush regeneration and the need to centre Indigenous voices in bushfire preparation, response, and recovery. Indigenous perspectives have traditionally been erased from conversations about managing Country in favour of Western views of fire and land management, despite the past successes of cultural burning practices and fuel management. (5)

Brandalism, described as ‘a revolt against the corporate control of culture and space’, is a global activism movement which uses ‘subvertising’ or ‘culture jamming’ to explore contemporary social, political, and environmental issues and confront how these issues are presented in the media. (5) Founded in the leadup to the 2012 Summer Olympics in London, the movement was led by a group of artists who replaced 35 billboards across Leeds, Manchester, Birmingham, Bristol and London with satirical artwork critiquing consumerist culture. (6) But the technique used by Brandalism isn’t new. Drawing inspiration from ‘detournement’—a French term referring to the reappropriation of popular culture—Brandalism’s techniques were used in the 1970s by the Australian Billboard Utilising Graffitists against Unhealthy Promotions (BUGAUP), who reappropriated billboards in a campaign against the promotion of tobacco and alcohol consumption. (7) 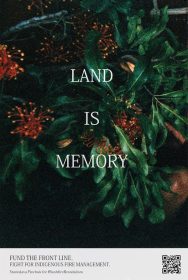 Representing a significant acquisition for Queensland Museum’s social history collection, this collection of posters documents a critical moment in our nation’s environmental and climate history. Queensland Museum is committed to the preservation of objects and stories that empower audiences to critically examine the social and political world around them.

The posters join collections from movements such as School Strike 4 Climate and Extinction Rebellion to present a contemporary narrative of climate activism in Australia. Bushfire Brandalism demonstrates the political mobilisation of Australian artists and their commitment to addressing the climate crisis. And while bushfires may have temporarily taken a backseat to the COVID-19 pandemic, they pose an omnipresent threat to our unique ecosystems and wildlife. The time to act is now.