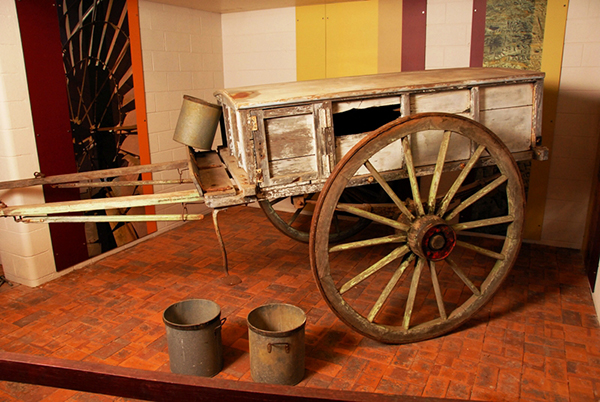 Use of the humble night soil cart, or dunny cart helped eradicate typhoid and cholera.

How objects shape our identity, The Queensland Museum Network Blog, May 2020

Our doors may be closed but that won’t stop Queensland Museum Network from celebrating International Museum Day 2020!

This event is celebrated globally on 18 May every year and this year, the International Council of Museums (ICOM) has chosen the theme of Museums for equality: diversity and inclusion.

We’ve taken a trip around our campuses (virtually of course) and asked our curatorial staff from Queensland Museum South Bank, Museum of Tropical Queensland in Townsville, Cobb+Co Museum Toowoomba and  The Workshops Rail Museum in Ipswich to each share an object that tells a story about the campus and what connects them to their visitors.

In strange times like these, museum objects that have lain undisturbed and unexamined for many years can suddenly take on new meaning and significance. One of these objects is Queensland Museum’s ‘Both Respirator’, a metal, coffin-like breathing apparatus more commonly called an ‘iron lung’. 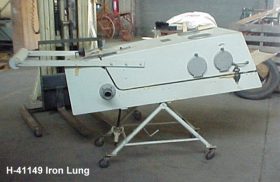 Affectionately known by its user, Fay Cottrell, as the ‘Yellow Submarine’, the Both Respirator was designed and developed in 1937 by South Australian biomechanical engineer, Edward Both and his brother Don during Australia’s worst recorded polio outbreak. 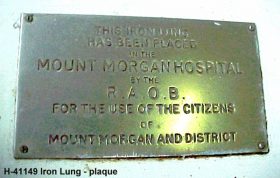 The invention was Australia’s answer to the heavy, bulky and expensive American models available at that time. The device worked by changing the air pressure inside an airtight box – known as negative-pressure ventilation (NPV) – allowing the lungs to expand and contract in response.

In this moment of crisis, the iron lung has been given a new lease of life with the development of a new NPV device, the ‘exovent’, which, unlike the ventilator, doesn’t require intubation and is much simpler in design and operation.

The pearl shell industry in the Torres Strait is one of the earliest maritime industries in Australia. First established in the 1860s, by 1890 the Torres Strait was supplying over half the world’s demand for pearl shell. Large quantities of pearl shell were sent to the UK and USA for the manufacture of clothing accessories, like buttons and buckles. 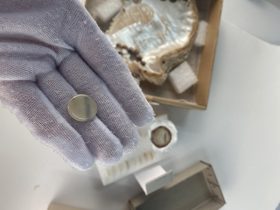 The demand for pearl shell drew large numbers of people from overseas looking for work in the industry, and like many industries in this era, pearling relied on exploitation. Aboriginal people were forced to work without wages, or were kidnapped, black birded and put to work.

Immigrants were treated poorly, and many of the divers went without equipment to collect the pearl shell, exposing them to a number of dangers. So when reflecting on equality this International Museum Day, it is important to remember what these enchanting objects represent and the place they hold in Australia’s past.

Jeff Powell, the Cultures and Histories curator’s favourite item is the humble night soil cart, or dunny cart. This cart was built in the 1890s and used by Robert Hunter, father of the famous Hunter Brothers who had Brisbane cleansing contracts for decades. In this time of pandemics it is not hard to appreciate the importance of the dunny man and his cart taking away the pan of ‘night soil’ and leaving a fresh can in the backyard toilet.

Germ theory was gaining momentum in the last decades of the 19th century, at the same time our towns and cities were expanding. Toilets were just built over a hole in the backyard, but with an increasing population the soil couldn’t absorb all the effluent. Muck from cesspits leaked into creeks, the water table, and ultimately wells where people drew drinking water. Typhoid and cholera outbreaks resulted. The dunny cart helped eradicate these diseases. 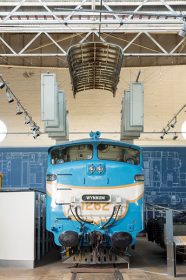 Of all the locomotives at The Workshops Rail Museum, 1250 Class Diesel No.1262 is our Collections Manager, Rob Shiels favourite. Not only does 1262 have a strikingly handsome design and colour scheme, it is the object that we use to tell one of the most important railway stories in Queensland’s history; the diesel revolution and the beginning of a new era of modernisation for railway transport.

The 1950s was a decade of great change for railways in Queensland; it ushered in the era of air-conditioned carriages, a brand new railway workshop at Redbank and of course the adoption of diesels. The first diesels were painted the distinctive baby blue colour that would characterise Queensland Rail’s diesels for the next 30 years, but their appearances were awkward and purely functional. In 1959 the English Electric Company at Rocklea built the 1250 Class.

No. 1262 entered service in 1961 and would travel over 2.7 million kilometres before retiring in November 1988. Diesel locomotives have been part of Queensland for 70 years now and in that time no other class of diesel has come close to matching the visual appeal of the 1250 Class. There are only two remaining from the 17 originally built and the No.1262 ‘anatomy of a diesel’ display at the Museum is the only chance you’ll have to see this remarkable machine up close.