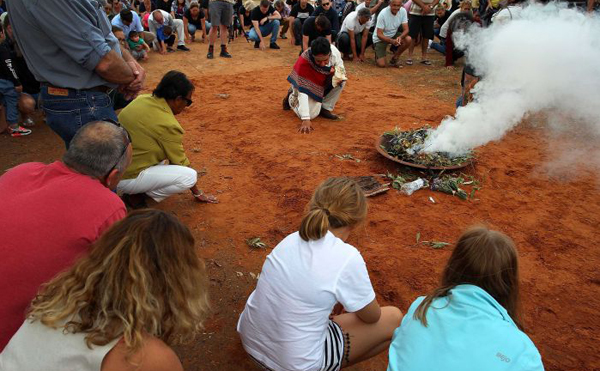 Guests take part in a smoking ceremony during the arrival of Mungo Man and ancestors at the Balranald Aboriginal Cemetery on November 17, 2017 in Balranald, Australia. Getty.

The remains of up to 10,000 Aboriginal and Torres Strait Islander people are kept in museums around Australia. Their descendants want them back.

In the Queensland Museum, on the fifth floor, down a hallway and through a storeroom are the remains of 660 Aboriginal and Torres Strait Islander people.

“They call it the secret sacred room,” Leonie Coghill, the manager of repatriation at the Queensland Museum, and Quandamooka woman,told Hack.

“In my eyes it’s a temporary cemetery for the remains of the people we have here.”

The room looks like any other museum storage space. Tall steel shelves are stacked with grey shoe-box style containers, which hold the remains. They’re arranged by sex, age and location, so the older women, for example, can continue to share stories.

The remains here are in the care of the museum after being collected by anthropologists, pastoralists and even police in some cases over the last 150 years.

It’s Leoni’s job to reconnect them with the families and country they’ve been taken from.

“I feel a sense of these are my community, that these are my people, and I have an obligation to care for them when they’re in this vulnerable state.

The Queensland Museum isn’t the only one with the remains of Indigenous people within its walls. The South Australian Museum is the custodian of more than 5,000 remains, the National Museum of Australia holds 727.

Not everyone is a fan of museums having that control though. Take Bob Weatherall for example.

“What they’re denying us is our decision making process and our own governance of making those decisions,” he told Hack.

Bob is a Goomeroi and Ngemba man from out near St George. For the last 40 years he’s worked to get Aboriginal remains and cultural items out of museums and back into the control of indigenous people.

“Basically the people themselves always believed that they would rest in peace with accordance to customs and traditions that they would become one with the earth, their mother.”

He says it’s time for Indigenous people to take over from the museums, who’ve done as much as they can.

“They’re not knowing how they should do it because it’s not their culture.”

‘So wrong on so many levels’

Bob Weathall’s son, Warraba, from the Kamilaroi nation, is following in his father’s footsteps and also pushing for Aboriginal remains and cultural items to be handed back to Indigenous people.

“It’s not a normal thing, you don’t just continue to house a deceased person in a collection that works out to be their financial capital of that institution,” he told Hack.

When Queensland Museum was asked about whether it uses the remains in it’s collection for financial gain it said it: “does not usually reference remains in funding applications and strives to maintain and respect community anonymity as much as possible.”

Warraba hates the idea of institutions and Governments controlling this cultural property and says it should be up to communities to determine how these people and items should be managed.

“I’d like to see a lot more exposure and dialogue for this conversation, across all networks, and for people to put more pressure and ask more questions about why isn’t this happening.”

One of the challenges with returning remains to country is the poor record keeping of the collectors. Not knowing where someone’s remains were taken from can make it almost impossible to connect them with their community.

This is the story behind some of the remains kept in our nation’s museums. They just don’t know where they have to go back to.

Other remains are cared for on behalf of communities who’ve been reconnected with ancestors but don’t have anywhere for them to go.

Plenty of them have found their way home, more than 1,200 from the National Museum for example, but for those that can’t get back to their country the idea of a national resting place has been proposed.

That idea has been around in some form since 1994 and was recommended again in this 2014 report, but as yet nothing has been created.

Bob Weatherall prefers the idea of a cultural hub over a resting place, where Indigenous people can take control of the remains, as well as cultural items, currently being held by the state.

“They have a right to be returned to their communities of origin or an aboriginal controlled homeland.”

Even Leonie Coghill doesn’t see the Museum as the place where these remains should stay, although she thinks that for the immediate future there’s not really a better option.

In a perfect world she’d be out of a job.

“What I would like to see eventually is all empty shelves and everyone gone home, and I’ve promised them that but I don’t know how good I’ve been at getting it done.”

Leoni believes your spirit empowers and helps your community when you’re back on your country, so their time with her is a big interruption in their journey.

“it’s not just a whole bunch of dried bones, there are spirits attached and they love getting visitors, they love people coming out and having stories.

“That’s why we have these seats here, [to] give them hope their journey will continue somehow.”

Positions Vacant » View All
» First Nations Producer – Australian Museum Trust
» Workshop Preparator – MAAS
Latest News » View All
South Australia’s History Festival 2021
HTSA & “A State of Change” 1-30 May Read more.
Hawaii’s Bishop Museum $1M Mellon Fdn grant
Te Rangi Hiroa Curators & Caretakers Pgm Read more.
Natl Aboriginal Art Gallery “stories
to heal, to provide faith for communities” Read more.
Tracy Puklowski to leave QVMAG for
Natl Aboriginal Art Gallery, Alice Springs Read more.
22 royal mummies leave Egyptian Museum for
National Museum of Egyptian Civilisation Read more.
Top +
Council of Australasian Museum Directors, c/o Ms Daryl Karp, Museum of Australian Democracy at Old Parliament House PO Box 3934 Manuka, Australian Capital Territory 2603 Australia, © CAMD 2021
Copyright: All information and resources provided on this website remain the copyright of the Council of Australasian Museum Directors. Permission is granted for viewing and downloading for personal and not for profit purposes. Those wishing to reproduce any materials for commercial, educational or other uses are requested to contact us.
Disclaimer: The content of this website is provided for information purposes only and is not intended as a substitute for professional advice. No claim is made as to the accuracy or authenticity of the content of the website. The Council of Australasian Museum Directors does not accept any liability to any person for the information or advice (or the use of such information or advice) which is provided on this website. The information on our website is provided on the basis that all persons accessing the site undertake responsibility for assessing the relevance and accuracy of its content. No responsibility is taken for any information or services which may appear on any linked web sites. Hostgator.
.