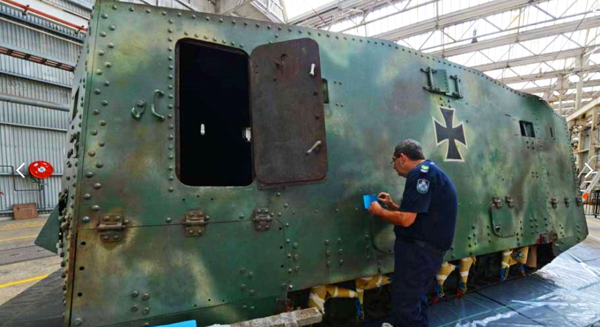 The newly restored “Mephisto”, the World War One German tank familiar to generations of Queensland Museum goers, is the centrepiece of an outstanding new permanent exhibition, the Anzac Legacy Gallery.

Mephisto recently underwent conservation work at the Australian War Memorial in Canberra before being returned to Brisbane, one hundred years after it had been recovered from the battlefields of France by Australian soldiers from Queensland.

Premier Annastacia Palasczcuk has previewed the new Anzac Legacy Gallery at the Queensland Museum at Southbank ahead of its public opening in time for Remembrance Day on November 11th – the centenary of the Armistice.

“The Gallery is an important addition to the Museum, with an impressive and moving collection of historical items of great significance to Queensland’s Anzac story,” Ms Palaszczuk said.

“Mephisto takes centre stage, but there are many other remarkable and historically important pieces displayed in a sensitive way.

“The Victoria Cross awarded posthumously to 20-year-old Paddy Bugden will be on display.

“Vestments worn by Army Chaplain David Garland, who drafted the first Anzac Day order of service in 1916, will be a key object in the Gallery.

“And a rare, 100-year-old mourning gown has been recreated from the fragile original to give an insight into how war affected bereaved families at home.

“I encourage Queenslanders young and old to visit the Gallery after it opens in just under two weeks.”

The Queensland Government contributed $8.4 million, just over half the $15.7 million cost of the Gallery.

“The Queensland Museum has one of the best attendance records in Australia, right here in South Brisbane, and now there is even more reason to visit,” Ms Trad said.

“Families, school groups, tourists and locals will all be struck by how moving this Gallery is, as well as its historical interest.

“Lest we forget the sacrifices of war, we will remember those who gave their lives or wellbeing, and their families at home.

“The Anzac Legacy Gallery will help us do that, in a new and very special place.”