According to science, if you own a 4WD, watch out, you could very likely be gathering a small following of eight-legged friends. 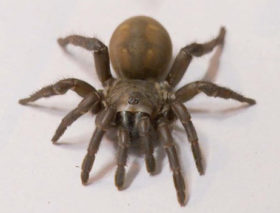 Dr Robert Raven, an arachnologist from the Queensland Museum explains to the ABC, that he’s not only witnessed floods of spiders heading towards 4WDs, but he uses 4WD’s vibrations to lure spiders out of their environment for study.

“Vibration is a medium by which a lot of communication occurs in the animal kingdom,” Dr Raven told the ABC.

“The week before the earthquake in Aceh, all of the hooved animals moved up into the hills, they could feel the vibration coming.

“We know that elephants can actually sense vibration over hundreds of kilometres. And they can detect who sent it and what it’s about.”

Vibrations in any form whether they’re natural such as an earthquake or merely the vibration of 4WD will agitate animals. Vibrations irritate spiders so much, they abandon their inbuilt self-preservation and run towards what they perceive as danger.

“I deliberately got an old diesel in order to get this effect. Because the new ones are too sweet and smooth,” says Dr Raven, who studies arachnids in Australia told the ABC.

“When you let one of these old diesels idle for example on sand on a hot day, spiders that normally will not move in the daylight, are running towards the car. They are highly disturbed.”

Dr Raven explains that by using this method, he will attract more spiders than he would using any traditional trap or collection method.

If you’ve got a 4WD, make sure you check your shoes, glove compartments, under seats or even your car visor for the eight-legged insect.

Arachnophobes, stay away from 4WDs.