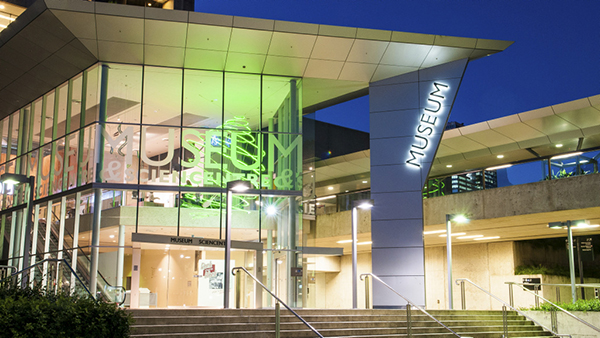 We’re taking it way back to celebrate International Museum Day this 18 May and revisiting the Museum’s rich location history.

As we approach International Museum Day on 18 May, we reflect on the history behind the various locations of Queensland Museum and its 157 years of monumental displays, exhibitions and encompassment of history. 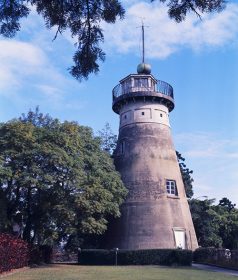 The Windmill on Wickham Terrace, Brisbane. This was the first housing for the fledgling Queensland Museum from 1862 to 1869

The Windmill 1862, where it all began, the first housing for the newly conceived ‘nucleus of a Museum of Natural Science’, whereby the Moreton Bay Council granted temporary use of a ‘large room in the windmill’. The windmill continues to stand tall in Spring Hill and has since been heritage listed. It is also one of only two buildings that remain from the penal settlement. Built in 1827 under Commandant Patrick Logan, it was initially designed to grind corn and wheat for the colony. However, faults often arose and as a result, convicts constructed a treadmill beside it.

During a Philosophical Society meeting in 1866 it was reported that the Windmill suffered considerable damage due to heavy rains. It was then decided in October 1868, the room formerly occupied by the parliamentary library in the Parliament Building would be the new host of the society’s entities. In June 1871 it was established that an additional room be made available for the purpose of creating a mineralogical museum initially intended to boost the mining boom. The Parliamentary building, located on the north-western side of Queen Street, had been erected as a convict’s barracks in 1826. Although the location was central and accessible, the space the museum occupied was far too small. It was recommended by a colonial architect that a building on Ann Street be purchased and restored. This idea was soon rejected and a temporary home further up Queen Street was selected.

The Post Office building, standing between the site now occupied by the Lennons Hotel and George Street, originally consisted of six apartments. In 1873, rooms for an office, laboratory and a larger one for a mineral display were obtained. It was recognised not long after moving into the space that the old Post Office was not an ideal location. 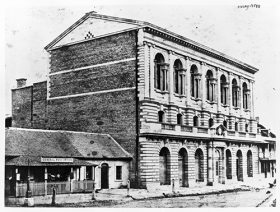 The General Post Office and the new Brisbane City Hall about 1864. Photograph by courtesy of John Oxley Library.

In 1879 the construction of the First New Museum Building was completed. The building costing £10,706, was designed in the Colonial Architect’s department under architect F.D.G Stanley and still stands today as the State Library. The main entrance floor was one of three used for display and the basement contained a large room used as both a library and meeting place. 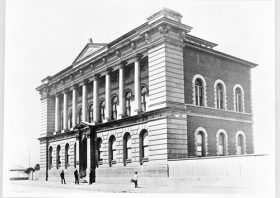 As a result of the collecting programs the building proved to be too small, and due to the depression and financial difficulties plans were again put on hold. The Exhibition Building became home to Queensland Museum for the next 86 years after its completion in 1891 and was a combination of Romanesque, Byzantine and Baroque influence in polychromatic brickwork. The building was built after the original timber exhibition building was destroyed by fire. 300 men of all trades worked on the brickwork at one time.

A Museum worthy of the city and the State

One of the first tasks undertaken by the museum’s board of trustees following its re-establishment in 1970, was to encourage the Queensland  Government to provide provisions for adequate housing for its museum. It was the state government’s decision to eventually develop on the south bank of the Brisbane River, a cultural complex that would include a museum, theatres, state library and an art gallery. Robin Gibson of Brisbane was chosen to design the cultural centre, which was then opened in 1985 and has since remained. The building consists of 5,000 square metres across three display floors and an external geological garden.