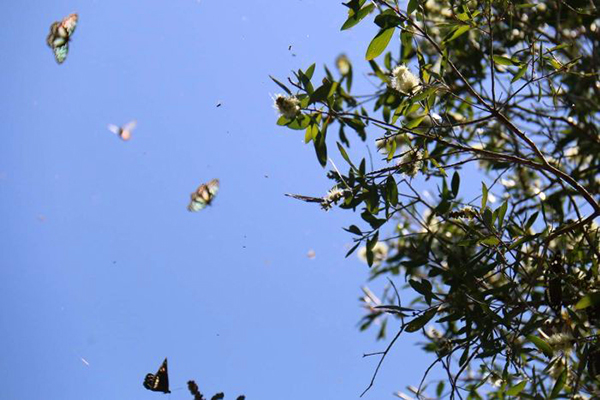 This tree in Stuartholme, in Brisbane’s west, has attracted many butterflies. ABC News: Lucas Hill.

Have you noticed an explosion of butterflies?

The prolonged drought followed by recent rains has seen a breeding frenzy across South East Queensland.

An absolute abundance of butterflies and moths are fluttering around trees with gardens awash with all kinds of insects. 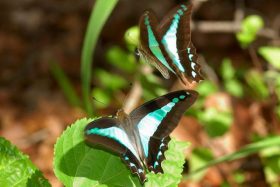 Blue triangle butterflies are among the species that have boomed in numbers. Supplied: brisbaneinsects.com

The curator of entomology at the Queensland Museum, Dr Christine Lambkin, said it was great to see.

“People have been saying for so long, ‘Where have all the insects gone?’ — well, they are back again,” she said.

“We have finally had the rain and all these butterflies and other insects have all emerged and are out and trying to finish off their life cycle in preparation for the next year.

“The insects are massively responding to the heat and humidity.”

The most prolific at the moment along Queensland’s south-east coast is the lemon migrant butterfly.

“If you can get one to sit still, you are very lucky because these guys fly very, very fast — about two to seven metres above the ground and they don’t sit still,” Dr Lambkin said.

“Normally they last one to two weeks but they could be around for up to three weeks this year. 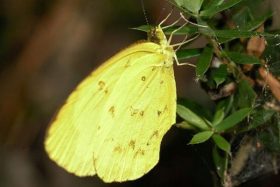 “It is later than usual as you would normally expect this influx before Christmas.”

The unusual thing is the large number of the dark form of lemon migrants.

“It is the dark form that tends to do these massive migrations,” Dr Lambkin said. 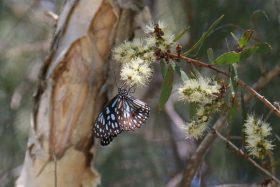 Blue triangle butterflies have also been out in large numbers along with butterflies that feed on citrus.

“We are also just starting to get reports of blue tigers which have black and blue spots and we will possibly get a migration of those as well,” she said.

The museum has received numerous reports of outbreaks of insects from Western Queensland.

There have been reports of large numbers of gidgee bugs in Western Queensland. ABC News: Julia Harris.

“We have also had gidgee bugs and field crickets out west and the big green ground beetle.”

She warned gardeners to be wary.

“There is very little you can do generally — just keep an eye on your plants and pull off the caterpillars and grasshoppers as you find them,” she said.

A long-haul truck driver also told the ABC the butterflies are not confined to the state’s south east.

He said he had to stop to wash butterflies from his windscreen after driving 150 kilometres south from Mackay, then had to do so again by the time he reached Rockhampton.