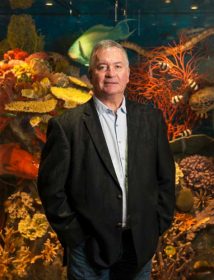 Dr John Hooper has been an integral part of the Queensland Museum Network and has made a significant contribution during his 27 years here, 14 of which he has been Head of the Biodiversity and Geosciences program.  Having retired in June 2018, John leaves a lasting legacy not only to the Queensland Museum Network but to the broader scientific community.

Passionate. Committed. Diligent. Reliable. Good-humored. Positive. Hard working. These are some of the words used to describe John by his peers. With a career spanning for decades, John has dedicated his working life to discovering and documenting our unique marine and terrestrial, living and fossil faunas, and has become a true leader in his field, with his contributions to the scientific community too numerous to count. John  is an international authority on sponges (Phylum Porifera), with specific research interests in their taxonomy, systematics, evolutionary biology, and in global biodiversity and marine conservation in general.

John first came to the Queensland Museum in 1991 in the role of Senior Curator, Sessile Marine Invertebrates and has held various positions over the years within the Queensland Museum Network, even keeping newspaper clippings of the job advertisements along the way! John progressed through the organisation to hold the roles of Acting Director of the Natural Environment Program, Director of the Queensland Center for Biodiversity, Head of the Biodiversity Program and eventually Head of the Biodiversity and Geosciences Program, leading a group of approximately 30 permanent scientific and technical positions, up to 15 grant funded staff and a pool of over 40 active Honorary staff and volunteers from across the Network.

Chair of the Board of Queensland Museum, Mr David Conry said that, on behalf of the Board, he would like to thank John for the contribution he has made to this institution and to the people of Queensland.

“It is quite profound, you’re an expert in your field, and as a result our institution is far better off for your contribution, and your knowledge and expertise”, said David.

“But most importantly, the way that you’ve dealt with people, your generosity of time and spirit is absolutely remarkable. You are a great friend to the organisation and I wish you well in your retirement.”

Queensland Museum network Acting Chief Executive Officer, Dr Jim Thompson said that whilst it is a sad time for the Network, John’s contribution to the organisation will not be forgotten.

“John had been an absolute delight to work with and had been a great support for me in my time here,” said Jim.

“He had had and amazing career in which he has described or revised over 600 new species and new combinations, more than 10 new genera and two new families and suborders of sponges since 1982, with over 230 peer-reviewed publications and 125 other technical, popular and conference papers and industry reports.”

John is particularly proud of the aptly named  ‘Bob Marley Sponge’ (Pipestela Candelabra) that he described with other scientists in 2008. Named to compliment the dreadlock style growth form, this new species of a new genus is one of the most widely distributed sponge species on the Great Barrier Reef, extending into Papua New Guinea, the Solomon Islands and Vanuatu at a depth of 10 to 20 metres . At the time of discovery, John made the comment that “finding such a common animal, belonging to a new genus, widely spread across the great Barrier Reef was an example of how little we still know of the taxonomy of even our shallow coastal waters”. With new species still being discovered 10 years later this statement is more relevant than ever.

Over his career, John has raised over six million dollars in external grant funding, supervised several PhD and postdoctoral students, holds two adjunct appointments, and serves as Chair on a number of national committees, editorial and advisory boards, most recently as the Chair of Council of Heads of Australian Faunal Collections, Chair of the Atlas of Living Australia Management Committee, and the Australian Biological Resources Study Advisory Committee.

John has worked and collaborated extensively with various agencies since 1987 and through these collaborations Queensland Museum had been given the unique opportunity to build extensive collections of sessile marine invertebrates from reefs across tropical Australia, Southeast Asia, the Indo-Malay Archipelago, the western Pacific Rim and throughout the pacific Islands.

Ms Libby Evans-Illidge, Research Director of the Australian Institute of Marine Sciences, one of the organisations John has collaborated with, said that one of John’s most significant scientific contributions is in taxonomy and systemics  the Phylum Proifera. “Besides singlehandedly describing or revising over 600 new species, John has helped bring order to an otherwise chaotic and enigmatic phylum,” Libby said.

“There is no doubt that the sessile marine invertebrate collections curated at Queensland Museum under John’s leadership (including those provided by AIMS) have underpinned modern conservation planning in Australia,” she said.

Professor Ronald Quinn from the Griffith Institute for Drug Discovery said that John had made outstanding contributions to partnerships and engagement within Griffith University over the past 25 years.

“We could not have attracted Astra and subsequently AstraZeneca to invest over $100 million in Queensland Biodiversity without his willingness to collaborate and the world class expertise that he has contributed.”

Two former students of John’s, Professor Gert Wörheide and Dr Dirk Erpeneck, both from Ludwig-Maximilians Universität Müchen, spoke about John’s dedication and attention to detail, particularly shown through his authorship of ‘the sponge bible’ Systema Porifera in which he brought together sponge experts to produce one of the most important works in the filed.

“In his taxonomic and systematic work on sponges, John is very passionate, diligent, and exhaustive. He plays excellent attention to detain but also never loses sight of the bigger picture of marine biodiversity at large. He is a great mentor of young aspiring scientists,” Gert said.

“John’s passion for sponge taxonomy and diversity is highly contagious, and his knowledge of these critters is outstanding,” Dirk said.

Dr John Hooper has been an integral part of the Queensland Museum Network and will be greatly missed.