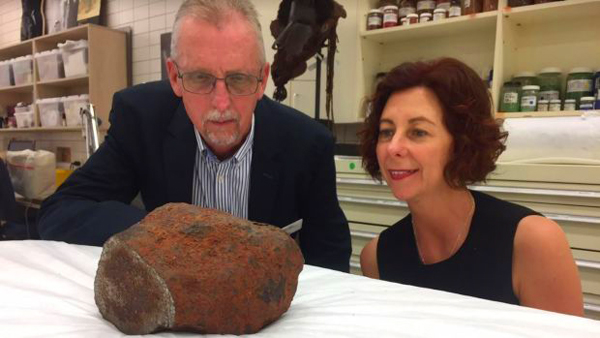 On the meteorite “black market” this piece of iron and nickel-rich rock from space is worth “many hundreds of thousands of dollars.”

But now this very rare nickel-iron fragment from an asteroid found on Earth is owned by Queensland Museum for a cost of $100,000. It is one of only five in the world.

Queensland’s 15-kilogram meteorite – about the size of small hot chook – was found near Georgetown in Queensland’s Gulf Country by two gold prospectors; a husband and a wife who want their identity kept secret.

“He and wife came across what they thought was at the time this massive gold nugget,” Dr Adland said.

“You can imagine their excitement over that. And when they had a better look at it, it didn’t look at all like a gold nugget.”

The Georgetown meteorite is very heavy for its size; weighing 15.3 kilograms for something about half the size of a football and worth a lot of money, Dr Adland said.

The gold fossickers have now sold the meterorite to Queensland Museum for $100,000, which was raised by two $50,000 cultural heritage grants from the federal and Queensland governments.

“They eventually got in touch with Queensland Museum, because they decided it should stay in Queensland,” Dr Adland said.

“After some negotiations and looking at the meteorite they decided that they would sell it to the Queensland Museum at less than its current market value,” he said.

“So even though it was not gold, it was worth a lot of money.”

Its real value lies in what it can tell scientists about how our solar system was formed from a whirling explosion of gas and dust around 4.6 billion years ago.

The leftover particles from this process are still floating in space as asteroids – in large asteroid belts – until they fall to earth as meteorites.

Queensland Museum mineralogist Dr Andy Christy said the rare quality of the meteorite was discovered when the fossicker sawed through one end and found the metal ores inside the meteorite.

“But this spectacular specimen features branching crystals of metals – similar in shape to staghorn coral – encased in bronze-coloured iron sulphide,” he said.

Dr Christy will begin several months of investigations before revealing his findings early in 2018.

“Studying this meteorite will ultimately reveal exciting details about how old it was and where it came from,” he said.

“But it will improve our understanding of how planets like Earth would have formed from collisions and mergers between smaller bodies in the earliest days of the solar system.”