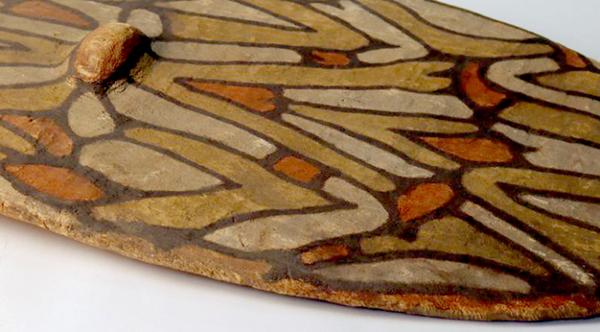 This shield was made by the Rainforest people situated between the Townsville and Mossman Regions. This community is best known for their swords and shields, which distinguish them from other Indigenous language groups. Shields such as this one were shaped and then painted with rich ochre colours, creating abstract designs that represented both animal and plant totems.

The theme for National Reconciliation Week in 2019 – GROUNDED IN TRUTH – recognises that to strengthen Australia’s race relations, the relationship between Aboriginal and Torres Strait Islander people and all other Australians must be built on truth. The theme encourages all Australians to come to terms with our shared history, to unify the country and continue to create a culture of respect and understanding.

The 27th of May, 1967, marks the date of the Australian Referendum, in which over 90% of Australian voters said ‘YES’ to amending the 1901 Constitution in support of Aboriginal and Torres Strait Islander people. The overwhelmingly successful vote meant that Aboriginal People and Torres Strait Islanders would now be included in the census, and allowed the Commonwealth, rather than each individual state government, to create laws for them. This addressed the inequalities within the legal system from state to state. The Referendum became a key symbol for the equal rights movement of the 1970s.

Eddie Koiki Mabo was from Mer (Murray Island) in the Torres Strait. Mabo famously challenged the Australian legal system and won his people’s case for land ownership. The case, Mabo and others v Queensland (No 2) (1992) made its landmark decision on 3 June 1992, granting recognition of Aboriginal and Torres Strait Islander people as traditional owners of the land of their ancestors. The Mabo decision was a turning point for Aboriginal and Torres Strait Islander peoples in the fight for native title.

The Mabo decision abolished the doctrine of terra nullius, which was put in place by British invaders in 1788, meaning the land belonged to nobody. The Mabo decision identified that terra nullius should never have been applied to Australian land, instead recognising that Aboriginal and Torres Strait Islander peoples had occupied the land for 40 000 – 60 000 years before the British arrived.

In honour of National Reconciliation Week, have a look below at a range of Aboriginal and Torres Strait Islander artefacts from the Townsville region, that represent the Aboriginal communities from this part of the state.

A hafted stone axe, made by Russell Butler in 1998.

This digging stick was found by the Environmental Protection Agency during field work at Ross Creek, Townsville in 1998.

This necklace was made using echidna quills and red sandalwood seeds, threaded onto a nylon line with a gold plated catch. It was made in Townsville by Dot Prior in 1998.

This woven Pandanus basket was made by Sarah Wapau in 1990. Ms Wapau was born on Thursday Island, and was a prominent member of the Torres Strait Island community in Townsville when this item was purchased by the Museum in 1991.