More than 300 members of the Canterbury community, Government and local business leaders were drawn to the launch earlier in the month of Quake City in Re:START Mall  in Christchurch.

Officially opened by the Minister for Earthquake Recovery, the Hon. Gerry Brownlee, Quake City was well received, much to the delight of Canterbury Museum Director Anthony Wright.

“Opening Quake City is another step forward for our community,” he says.

“We’ve received overwhelming support from across the community. People have loaned or donated objects to go on display in the attraction, and our major sponsors EQC, The Press, Fletcher Construction Ltd, Placemakers Riccarton, Opus International Consultants Ltd and Warren and Mahoney have made significant contributions. The Canterbury spirit has been strong throughout.”

Mr Wright says Quake City provides not only a place for reflection and education for locals, but also a point of interest for domestic and international visitors to the region.

“Quake City serves to engage, inform and educate visitors on the seismic events that have ruptured our region since September 2010,” he says.

“We’ve used large-scale sensitive imagery, iconic objects, sound and film to enable visitors to reflect on what we have endured for the last two years, and praise those who went above and beyond to help during the aftermath of the quakes. We can also learn more about the science of earthquakes and look forward to the future as Christchurch’s rebuild gains momentum.”

The exhibition, put together by the Canterbury Museum, includes shattered pieces of the rose window from Christ Church Cathedral, alongside tributes to volunteer groups such as the Student Volunteer Army and photos of people’s homemade longdrops.

Mr Wright says the Museum has worked hard to develop the attraction over the last six months, and sees Quake City as a significant example of the Museum’s role in the community – to preserve Canterbury’s history and taonga for generations to come.

“From a Museum perspective, Quake City is a testament to the Museum’s talented exhibitions, curatorial and collections team who have been working 24/7 over the last six months to ensure the attraction is a success. It showcases our ongoing commitment to Christchurch and the wider Canterbury community as we develop a plan for our Museum for the next 100 years.”

As further evidence of the determination of the Christchurch community to restore and preserve their cultural collections, the Canterbury Cultural Collections Recovery Centre has also been formally opened.

The new Air Force Museum extension in Christchurch was conceived to house aircraft and large objects for conservation but is being used temporarily for the restoration, storage and rehabilitation of heritage and cultural collections affected by the Canterbury earthquakes.

The Canterbury earthquakes had a significant impact on Christchurch’s cultural sector, and put numerous cultural collections at risk through the possibility of damage or displacement.

The government supported the Air Force Museum’s initiative to provide safe and secure premises for the region’s collections, some of which are nationally and internationally important.

Government contributed $2 million to assist with storing and rehabilitating collections, on top of a Christchurch Appeal Trust grant of $1.5 million from the donations contributed from New Zealand and around the world. The remainder of the funding for the total Museum extension had already been raised from philanthropic grants, corporate sponsorship and gaming trusts.

“This was a real partnership for the benefit of the cultural and heritage sectors of the Canterbury region,” Mr Finlayson said.

The centre will enable recovery work such as conservation and cataloguing with the help of expertise from Te Papa National Services in an appropriate climate controlled, secure environment. 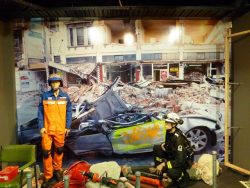 Quake City Exhibit. Picture: Canterbury Museum
Positions Vacant » View All
» Team Leader, First Peoples Art & Culture – TMAG
» Booking Services & Rostering Officer – SLM
Latest News » View All
Egyptians petition for BM to return
the Rosetta Stone Read more.
BM pledges ‘not to dismantle’ Parthenon
sculptures amid reports of talks with Greece Read more.
NHM to install life-size Titanosaur
cast The world’s largest dinosaur to fit (- just) Read more.
Gallerie d’Italia’s Art & Finance exhibition
- a long & mutually beneficial history Read more.
TMAG’s ‘Lost’ last Tasmanian tiger remains
found! ... cataloguing collections matters Read more.
Top +
Council of Australasian Museum Directors c/o Mr Brian Oldman, South Australian Museum PO Box 234 Adelaide, South Australia 5001 Australia, © CAMD 2022
Copyright: All information and resources provided on this website remain the copyright of the Council of Australasian Museum Directors. Permission is granted for viewing and downloading for personal and not for profit purposes. Those wishing to reproduce any materials for commercial, educational or other uses are requested to contact us.
Disclaimer: The content of this website is provided for information purposes only and is not intended as a substitute for professional advice. No claim is made as to the accuracy or authenticity of the content of the website. The Council of Australasian Museum Directors does not accept any liability to any person for the information or advice (or the use of such information or advice) which is provided on this website. The information on our website is provided on the basis that all persons accessing the site undertake responsibility for assessing the relevance and accuracy of its content. No responsibility is taken for any information or services which may appear on any linked web sites. Hostgator.
.