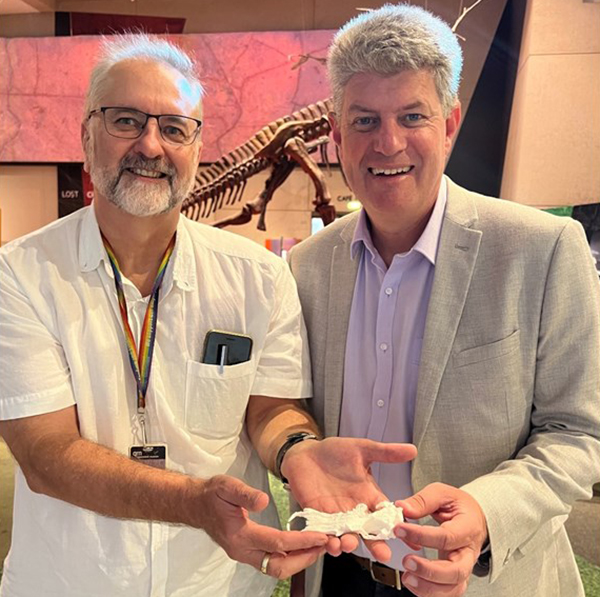 Minister for Tourism, Innovation and Sport and Minister Assisting the Premier on Olympics and Paralympics Sport and Engagement
The Honourable Stirling Hinchliffe.

Queenslanders will be able to pick their favourite fossil to add to Queensland’s nine official emblems from April 11.

Tourism Minister Stirling Hinchliffe said after feedback from museums, tourism organisations and councils, 12 fossils had been shortlisted by the Palaszczuk Government.

“Each of the dozen fossils on the shortlist symbolises Queensland’s natural history, unique landscape and biodiversity,” Mr Hinchliffe said.

“Many of the southern hemisphere’s best dinosaur finds are in Outback Queensland.

“We know Australian and overseas visitors are enthralled by Queensland’s rich palaeontological history.

‘Thousands of visitors flock to Queensland’s Outback every year to discover the State’s prehistoric dinosaur remains, generating millions of dollars for our tourism economy.

“From land-based dinosaurs and sea predators to crocodiles and ancient fauna and flora, we’re now asking Queenslanders to have their say on the fossil that best represents the State’s prehistoric age.”

“Everybody loves dinosaurs and that’s why our prehistoric past is a big part of Outback Queensland’s tourism recovery,” Mr Hinchliffe said.

“The Palaszczuk Government is investing almost $500,000 in a dinosaur tourism roadmap to bring together Queensland’s best prehistoric visitor experiences.

“Our roadmap will help tourism operators collectively promote the best Outback dinosaur destinations to domestic and international visitors to Queensland.”

Minister for the Arts Leeanne Enoch said she expected Queenslanders to embrace the opportunity to have their say on the State’s fossil emblem.

“For 160 years, Queensland Museum experts have been leading the way in sharing their knowledge and assisting with the establishment of regional museums.”

“At Queensland Museum Network, we take our role as custodians of the State Collection, including our fossil treasures, very seriously.

“Our team of palaeontologists work with regional museums around the state to share their knowledge and ensure the stories of our fossil history is shared far and wide,” Dr Thompson said.

“Australia is one of the last frontiers for dinosaur discovery and Queensland is rapidly becoming known as the paleo-capital of the nation – so it is a must that we have a fossil emblem that represents our state.”

“The fossil record can also tell us about the antecedents, the ancestors that gave rise to our modern Australian flora and fauna.

“This incredible wealth of discoveries from Queensland provides very rich pickings to select a state fossil emblem for Queensland.”

To learn more about each of the nominees and to have your say visit www.qld.gov.au/fossilemblem