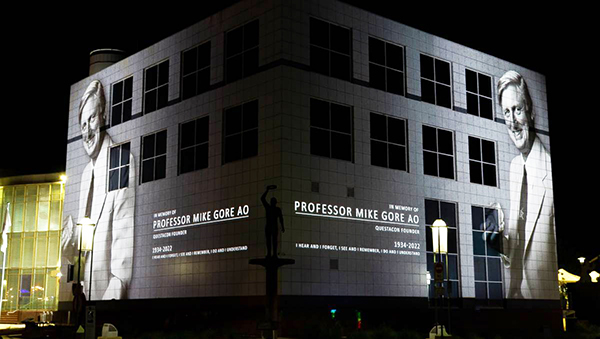 The late founder of Questacon, Professor Mike Gore, is being honoured every night of the Enlighten illuminations, the building he helped develop lit up by a tribute to him.

He spearheaded a movement that created Questacon in Canberra in 1980, Australia’s first interactive science centre.

“Including an image of Mike seemed to be a good way to acknowledge the impact that the founding of Questacon has had in Canberra, across Australia and internationally. The projections will be there throughout the Enlighten festival,” Prof Durant said.

But that won’t be the end of tributes for Prof Gore.

The National Centre for the Public Awareness of Science at the Australian National University is also planning a Mike Gore scholarship to support science communication studies.

Questacon plans to rename its Curiosity Corner in honour of Prof Gore and also run an annual memorial lecture capturing his approach to science communication.

And the Asia-Pacific Network of Science Centres will host an annual Mike Gore Memorial Masterclass to share best practice in science demonstrations starting later this year.

“Mike was a proud Canberran and it seems that everyone has a Questacon story,” Prof Durant said.