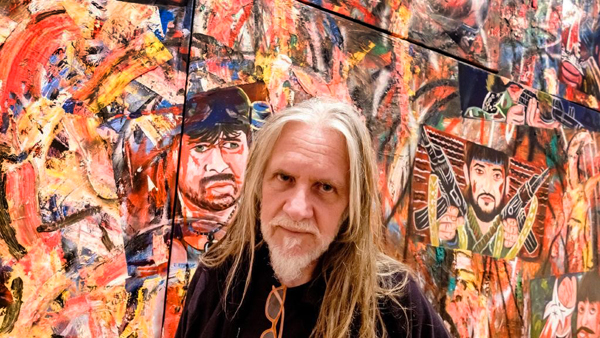 Artist George Gittoes in front of his mural “Civilisation” at QVMAG Launceston (pic supplied by QVMAG).

Hilary Burden, The art of war on museum’s walls, The Mercury, 3 December 2017

Civilisation – a bloody, large-scale mural created in a desert on the edge of a war zone in Afghanistan – has found an unlikely home in Launceston’s genteel Royal Park. The Queen Victoria Museum and Art Gallery has acquired what George Gittoes regards as “the most important work of my life – my Guernica”, referring to the famous anti-war painting by Pablo Picasso.

Created in nine different panels, Civilisation was inspired by the paintings of Pashto heroes that decorate rickshaws passing the artist’s “art in war” project at the Yellow House, Jalalabad – his second home for the past eight years.

Nearing 70, Gittoes is one of Australia’s great contemporary artists – a filmmaker, social illustrator and thinker, and recipient of the Sydney Peace Prize in 2015. He has dedicated his life to documenting and pursuing peace in conflict zones such as East Timor, Iraq, Rwanda, Mozambique and Somalia.

“In Launceston, we live in a comfort zone,” Mulvaney says.

“This painting takes us away from the cosy life we live here and helps us understand what’s going on elsewhere.”

But can a painting change anything?

“One painting can’t change the world, but the model of the Yellow House can. War is destruction. We’re creating in a place of war. Launceston is helping us to stay open.”

People think Gittoes and his artist wife, Hellen Rose, are brave, “but the truth is nothing bad has happened to us in eight years in Jalalabad”.

“Instead, we’ve seen kids able to pursue their creative talent, in a place where their talents are not [usually] acknowledged,” he says.

Whether it’s a Rambo knife the Taliban sees as a symbol of Hollywood’s invasive violent culture, or a lily provided by the gallery and set on a table that became a feature of Send in the Clowns, his latest political work painted live at the QVMAG opening, Gittoes is a master at absorbing the world around him rather than trying to control or reject it.

Mulvaney won’t say how much the gallery paid to secure Civilisation but says its ultimate value lies around the $500,000 mark.

“Australia seems to think that art is just something nice to put on their wall as an investment, and there’s no place for art and politics,” Gittoes says. “I’m told, more or less, that I shouldn’t exist. But there is room, I think, for one George Gittoes.”

George Gittoes’ Civilisation is on display in Gallery 7 at the Queen Victoria Museum and Gallery, Royal Park, Launceston, until February 18.