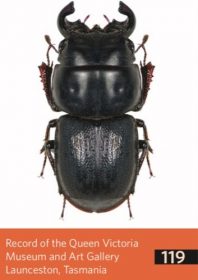 Napoléon Bonaparte sent French explorers on a voyage of discovery to the southern lands, in 1800. In the following two years the accompanying zoologists, led by Francois Peron, accumulated over 18 414 animal specimens, representing 3872 species, of which 2542 were new to science. One of these new species was a small flightless stag beetle that was eventually described and named Lissotes crenatus by John Westwood, entomologist with the University of Oxford in England. Unfortunately, the type location was simply recorded as Nova Hollandia. This inexact locality has hindered researchers and enthusiasts in determining and finding the actual habitat for this species, and for the past six decades, it was incorrectly assumed that the species may have been located on kunanyi/Mount Wellington in southern Tasmania.

In 2017, the entomological planets aligned and the type location for this mystery beetle was rediscovered. I had been sampling invertebrates on a small island in remote northwest Tasmania, and amongst the specimens were four male L. crenatus! Further investigation into the QVMAG collections located more unidentified specimens from a second island in that area.

How then, did the French explorers acquire the original specimens? To answer this question, I charted the movements of the French fleet around southeast Australia during 1802 and found that Francois Peron went ashore on King Island in December 1802. Based on this information we travelled to King Island in early 2019, with the support of the QVMAG Friends, and found L. crenatus in large numbers near the location at which Peron camped.

The rediscovery of this beetle highlights the need for ongoing fieldwork, the importance of museum collections and historical research. This rediscovery will help shape conservation management of this unique species and its habitat on the northwest islands of Tasmania.

Click here for the scientific paper (QVMAG Record 119) that was published on this rediscovery.