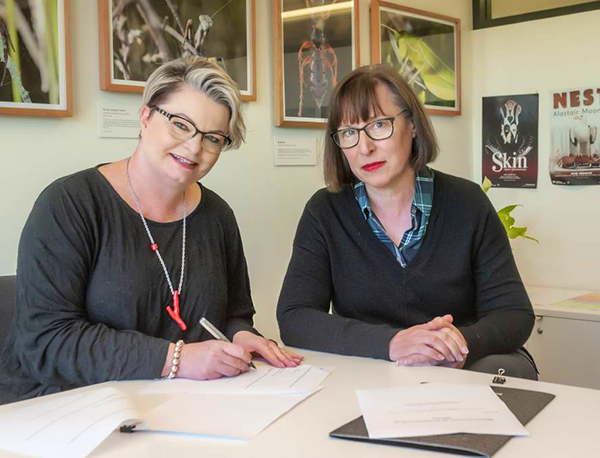 Dana Anderson, QVMAG, and TMAG sign Memorandum of Understanding to further arts and history in Tasmania, The Examiner, 26 February 2021

On Friday, both institutions signed a Memorandum of Understanding pledging to increase collaboration.

The document, signed in Launceston by QVMAG arts and cultural services general manager Tracy Puklowski and TMAG director Janet Carding, will translate into active programs and activities of mutual interest and benefit.

Though the two organisations have partnered on exhibitions before, Ms Carding said it was important to take the next step.

“There has been a good relationship between the two organisations over many years, but Tracy and I felt it was important to take this next step and formalise the relationship because we want to make sure it’s an intentional move,” she said.

Ms Puklowski agreed and said it was important to make a formal commitment.

“It’s important it outlasts individuals, it has to be organisation to organisation and something that actually carries into the future,” she said.

The MoU is for a period of five years, and the institutions will meet at least once a year to discuss strategic priorities and future projects.