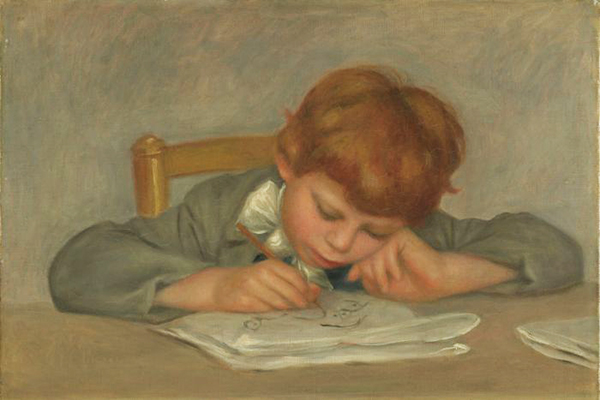 Renoir’s ‘The Artist’s Son, Jean, Drawing’. Curators at the museum confirmed the image was a reproduction after they magnified it and saw pixels. Supplied: Virginia Museum of Fine Arts.

Staff working in a government building in Launceston thought they struck gold when they found what they believed could be artwork by Pierre-Auguste Renoir on the office walls.

The painting was uncovered during a sweep of government offices for exhibits loaned by the Queen Victoria Museum and Art Gallery (QVMAG) in decades past.

Museum employees were on the hunt for a missing brush-and-ink piece by renowned Australian artist Brett Whiteley, Waves V, worth up to $30,000.

Poor record-keeping of the whereabouts of the Launceston museum’s 200,000-piece collection has caused headaches since it became apparent in late 2017 that the artwork by Whiteley — a two-time Archibald Prize winner — was missing, after a mainland researcher asked to access the piece for a retrospective.

After announcing the piece had been “misplaced” last year, Launceston’s council-run museum declared it would conduct an audit to get on top of its sprawling collection. 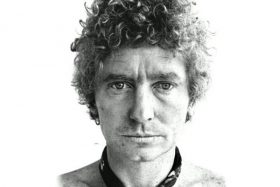 Brett Whiteley. The Launceston museum has been combing the state’s public buildings for loaned artwork after it realised it was missing a piece by Australian artist Brett Whiteley. Supplied: Transmission Films.

The ABC understands the reproduction Renoir — The Artist’s Son, Jean, Drawing — was among seven works recovered for the museum’s collection in May.

It was being housed in the State Government’s Public Building, home to senior Cabinet ministers, including Treasurer Peter Gutwein.

The print was examined by two curators who magnified it and saw it had pixels, confirming what the museum’s records showed: it was a reproduction.

“I contacted [redacted] … from the Department of Premier and Cabinet to ask if they have any records of QVMAG loaning works to hang in buildings for the State Government,” the staff member said.

“He got back to me and said there was no record of us ever loaning works, however we know that we did loan works to them in the past … so it looks like there wasn’t any paperwork associated with these loans, or if there was paperwork it wasn’t kept on file.”

In a statement sent to the ABC this week, Launceston City Council general manager Michael Stretton said Waves V was yet to be found.

“However, with the vast amount of objects to consider, there is still a long way to go,” Mr Stretton said.

Mr Stretton said 500 objects had already been audited during the ongoing search of the museum’s collection.

The council has stressed it was lending artworks to other agencies.

“The temporary exhibitions gallery located on the ground floor of the Art Gallery has been repurposed as the audit space, in which our curators, officers and volunteers are meticulously documenting the collection in full view of the public,” Mr Stretton said.

“We encourage the community to come along and watch us at work.”

One community member had suggested to QVMAG employees that taking artworks was seen as a “perk” of volunteering at the museum in past decades.