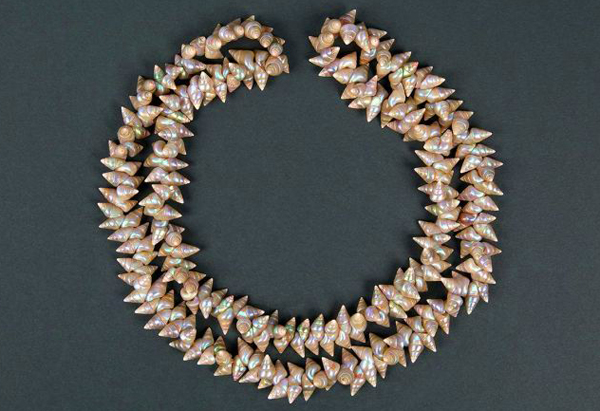 The necklaces on show represent one of those few areas where cultural practice has continued, uninterrupted. Supplied: QVMAG.

Tens of thousands of years of Aboriginal history is out of storage and on display in Launceston, as part of northern Tasmania’s first permanent Aboriginal exhibition.

The First Tasmanians: Our Story will officially open tonight at the Queen Victoria Museum and Art Gallery (QVMAG).

The exhibition has been two years in the planning.

“We deliberately wanted to tell the story of the 40,000 years of Tasmanian Aboriginal occupation — not just concentrating on the most recent times,” he said.

“When you go through an exhibition like this … (you) understand the complexity of Aboriginal society before white contact.

The exhibition includes dozens of items from the 19th century, including spears, clubs, shell necklaces and a basket belonging to the well-known Tasmanian Aboriginal historical figure Truganini.

Much had been in storage for decades.

“We’ve had a collection of Indigenous material for some time and I’ve had a concern that we’ve not had it out and we’ve not really told the Tasmanian Aboriginal story,” Mr Mulvaney said.

“This is an exciting day for everyone involved in the Queen Victoria Museum and Art Gallery.”

QVMAG curator Jon Addison is thrilled with the depth of the exhibition.

“This reflects the fact that necklaces are one of those few areas where the cultural practice has continued, uninterrupted, since the first Tasmanians first started making them.

‘We tell our story, our way’

Aboriginal artist Lola Greeno has been involved in planning the exhibition.

“I think it’s going to be fantastic for the Tasmanian Aboriginal community because we are trying to show the whole story,” she said.

“That’s what we want, to teach everyone from the children through (to the adults) the history and the awareness about what happened in the Aboriginal history of Tasmania.

“(It) looks at the shelters, the east coast and west coast huts, and also the stories regarding the stars and the moon — what that relates to in Aboriginal terms.