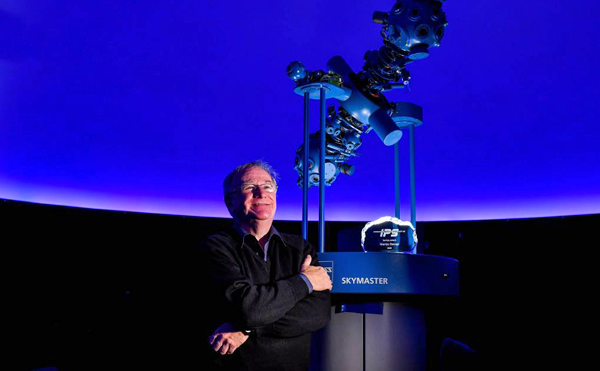 Queen Victoria Museum and Art Gallery collections and research manager Martin George was president of the IPS in 2005 and 2006. Picture: Scott Gelston.

Martin George believes his efforts in promoting worldwide collaboration in astronomical research and education will be one of his career’s lasting legacies.

This legacy was recently cemented by the most significant planetarium association in the world.

The award is the highest IPS prize available to its members, according to Mr George.

“I was deeply honoured,” he said.

“Some years there are none awarded … it’s an infrequent thing and they are only awarded at the conferences, and that’s every two years.”

Mr George was bestowed the honour after 28 years of membership with the society.

He has played a leading role in organising national planetarium associations in countries such as China and Brazil, while his work to create similar society’s in Thailand the Philippines is ongoing.

The society held its first ever conference in the southern hemisphere during his incumbency, when it was in Melbourne for 2006.

“For many years, I have been the chair for international relations [at the IPS], which brings planetariums from various different countries into our group and spreads the word about the society,” he said.

“We believe very strongly that talking to people about the night sky and teaching people about astronomy brings the world together.”

While Launceston’s leading astronomer has maintained an international focus in his work, he still plays a large role in advancing the profession in his home nation.

He said the future of astronomy was bright throughout Australia, particularly in Tasmania.

“I think Australia has fantastic expertise in astronomy,” he said.

“In fact, per head of population, Australia produces more research papers in astronomy than any other country in the world – that’s very, very impressive.

“Places like the QVMAG museum, and in particular the planetarium, are wonderful places for schools to come and enhance their education.”