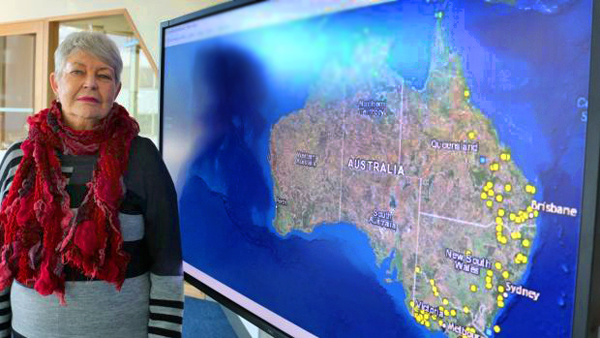 Professor Lyndall Ryan says the map is a significant step in the recognition of the periods of violence in Australia’s history. Photo: Supplied.

Almost every Aboriginal clan experienced massacres at the hands of early settlers in the “colonial wars”, according to the first stage of a new online mapping project.

So far the project has documented 150 massacres resulting in at least 6000 deaths in the early years of the colony.

Most happened at dawn with a surprise attack on an Aboriginal camp where people “simply couldn’t defend themselves”, said University of Newcastle historian Professor Lyndall Ryan, who has been developing the online digital map for nearly four years.

Yet those who died defending their people and land have rarely been recognised.

Professor Ryan and Tasmanian author Professor Henry Reynolds – whose books documented the “forgotten” and “silent” colonial wars against Aboriginal people – said it was time for the Australian War Memorial to recognise this war.

“Certainly it is time the War Memorial acknowledges these massacres,” said Professor Ryan.

By the time the project is completed in several years, she expects it will find that nearly 15,000 people were killed in massacres (defined as where six people or more died). This doesn’t include smaller attacks, which have been estimated by some academics to bring the death toll to more than 30,000 from 1788 until the 1940s.

The impact of the massacres reverberates across the generations.

“When I visit Aboriginal communities today the first thing they do is take you to the massacre site,” Professor Ryan said.

“There are children who witnessed it who are now elderly,” she said, referring to survivors of 20th-century massacres in the Kimberleys and the Northern Territory who are still living with the trauma of having seen their families slaughtered.

“We must celebrate NAIDOC because these are people who survived,” she said.

The map shows massacres were widespread, with intense periods of warfare, and often included soldiers and police.

Professor Ryan said the massacres of Indigenous Australians were conducted in secrecy and few perpetrators were brought to justice.

And they were planned in advance. “They were not spontaneous events. They were very well planned, designed to eradicate the opposition,” Professor Ryan said.

The project currently lists massacres from 1788 to 1872 on the eastern seaboard, and includes coordinates, photos of the location, the motive where known, details of when each started and ended, the clan or nation, and the sources of information.

At the Myall Creek massacre on the Gwydir River on June 10, 1838, 28 members of the Wererai clan were killed by settler John Henry Fleming and 11 stockmen. “Aboriginal people tied up in daylight,” reads the explanation on the map. “Driven to a stockyard and killed with swords, pistols and muskets.”

Aboriginal people had little chance of surviving. They had spears, waddies and hatchets to fight the colonists. The colonists wielded swords, pistols, muskets and bayonets.

There were also 11 cases of poisonings – five in Victoria and six in NSW. And in Queensland, around 60 members of the Giggarabarh people died after flour laced with strychnine was given to them by two shepherds.

Even for Professor Ryan, as a white historian who has studied massacres for many years, it took a while for the “penny to drop” before she realised the extent to which perpetrators went to eradicate the local people.

The most shocking for her was the Jack Smith massacre in Warrigal Creek in Victoria in 1843, where about 150-170 Brataualang people were killed over five days in retaliation for the killing of Ronald Macalister, the nephew of a local squatter.

It was a rampage, she said.

“The perpetrators went to huge lengths to keep quiet and hide the true horror.”

An avenging party of 20 horsemen, known as “The Highland Brigade” was organised to look for the killer. The brigade was “sworn to secrecy”.

Professor Reynolds has called the attacks on Indigenous Australians the “forgotten war of conquest that saw the expropriation of the most productive land over vast continental distances”, and the transfer of sovereignty from the Aborigines to the British government.

He said the deaths were almost inevitable given the way the British colonised Australia.

“They didn’t give any rights of property or sovereignty to the Aborigines,” Professor Reynolds said.

That meant there was nothing for the Aborigines to negotiate, and that remained until the law changed with the Mabo case, he said.

“The settlers felt they were the owners of the land, and [they saw] the Aboriginal people as the trespassers and they were the criminals who stole their land and cattle,” he said.

Professor Ryan said many Aboriginal people had contacted her with further details of massacres.

Many artists have depicted the massacres in their works, including Judy Watson’s “a picnic with the natives – the gulf”.

It includes a series of canvases showing dots on the map depicting massacre sites across the country.

These works “could possibly be the catalyst for instances of coming together to speak these stories out loud,” she said in notes accompanying the work at the Art Gallery of NSW.