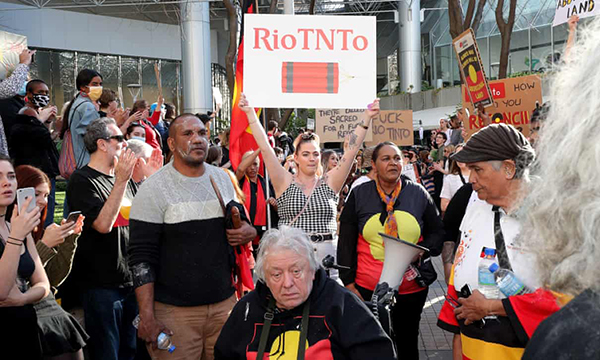 Protesters at a rally outside the Rio Tinto office in Perth on Tuesday. Reconciliation Australia has withdrawn its endorsement of Rio Tinto as a reconciliation action partner after it detonated explosives in the Juukan Gorge in the Pilbara, destroying two ancient rock shelters. Photograph: Richard Wainwright/AAP.

Reconciliation Australia has revoked its endorsement of mining company Rio Tinto as a reconciliation action partner over the destruction of a 46,000 year old Aboriginal heritage site in the Pilbara, branding it a “breathtaking breach of a respectful relationship”.

The not-for-profit announced its decision on Tuesday, while hundreds of protesters gathered outside the Perth offices of Rio Tinto and as other mining companies in Western Australia defended their management of Aboriginal heritage sites.

Rio Tinto’s chairman, Simon Thompson, has reportedly scheduled meetings with shareholders in the UK to repair the damage caused by the incident. The Financial Times reported the incident has been criticised by financial services company Legal & General, one of Rio Tinto’s 10 biggest shareholders.

“We have met with Rio Tinto to convey our extreme concern over recent events, and while not discounting their many positive outcomes and important work to advance reconciliation, Reconciliation Australia has revoked its endorsement of Rio Tinto as an Elevate RAP organisation and suspended the company from the RAP program.”

That suspension is dependent on how the company engages with the traditional owners of the Juukan Gorge site, the Puutu Kunti Kurrama and Pinikura (PKKP) peoples from now on, and on it releasing in full its review of the incident, which it had previously said would not be released.

In a statement, Rio Tinto said it valued its relationship with Reconciliation Australia and was sorry for the distress caused to the PKKP.

“We have a long history of working in partnership with Aboriginal and Torres Strait Islander communities – around our operations and across Australia more broadly and note the decision taken by Reconciliation Australia today,” a spokesman said. “We are very committed to our long-standing relationship with the PKKP and our immediate priority is to rebuild trust.”

The chief executive of Rio Tinto iron ore, Chris Salisbury, last week apologised for destroying the rock shelter in Juukan Gorge, which was blown up in mining works at the Brockman 4 iron ore mine near Tom Price in the Pilbara region on 24 May, saying there had been a “misunderstanding” with traditional owners the PKKP.

On Thursday, more than 300 protesters gathered in face masks outside the company’s offices on St George’s Terrace to call for Salisbury’s resignation.

Protest organiser Robert Eggington, a Noongar man, said that Rio Tinto had exploited the weakness of WA’s 48-year-old Aboriginal heritage laws, which have been under review for two years.

“They used that against the people and then turned and blamed [it on] misunderstandings between the company and the custodians of that site,” Eggington said.

“It’s so important to understand how Rio Tinto came like a thief in the night and blew away a site … that surpassed the last ice age.”

Rio Tinto received ministerial consent under the WA legislation to destroy the site in 2013. That legislation does not give traditional owners the right of appeal.

The PKKP Aboriginal corporation learned on 15 May that blast holes had been drilled in the site, and lawyers for the corporation wrote to the federal Indigenous affairs minister, Ken Wyatt, on 20 May, requesting his assistance with an injunction under federal heritage laws. Wyatt referred it to the office of the federal environment minister, Sussan Ley, who has carriage of the legislation, but did not personally lobby for an injunction.

Wyatt said he and Ley told the PKKP traditional owners in a teleconference after the site had been destroyed that they would “work to ensure that we don’t have further damage to sites”.

“Both Sussan and I have given an undertaking that we are going to do some further work within the immediate future to protect sites because we cannot afford to have any site destroyed,” he told the ABC on Thursday.

He said he agreed with comments made by his WA counterpart, fellow Yamatji man Ben Wyatt, about the need to reform the heritage laws, but said the federal laws should allow for intervention “in the event that a state chooses not to protect the site”.

Salisbury said the company was conducting a review of the incident, which he hoped would “raise the bar for industry”.

Rio’s main iron ore competitors in the Pilbara, FMG and BHP, both told Guardian Australia they worked closely with traditional owners and aimed to avoid impacts to Aboriginal heritage sites.

Rio Tinto also said it had a close relationship with the PKKP.

“Through these frameworks, Fortescue has worked with our Native Title partners to identify and protect over 5,000 significant Aboriginal cultural heritage places across our operations,” Gaines said.

Woodside said it has not made any section 18 applications since 2012, when it received — but abandoned, due to sustained lobbying — approval to destroy heritage on James Price Point.

A spokeswoman for Woodside said the company operated under four existing section 18 consent orders for the North West Shelf and Pluto lease areas, but added: “We have not disturbed any heritage places beyond the construction periods for each facility; the last of which was the construction of the Pluto LNG in 2007.

“Woodside conducts a review of its approvals on at least an annual basis and will continue to do so,” the spokeswoman said.

Woodside is still wearing the legacy of moving 1,800 petroglyphs from the site of the Karratha gas plant on the Burrup Peninsula in the 1980s. The Burrup and surrounding Dampier archipelago received national heritage listing in 2007. The Murujuga rock art site, which includes the oldest known carving of a person in the world, is on the Unesco tentative list for world heritage status.