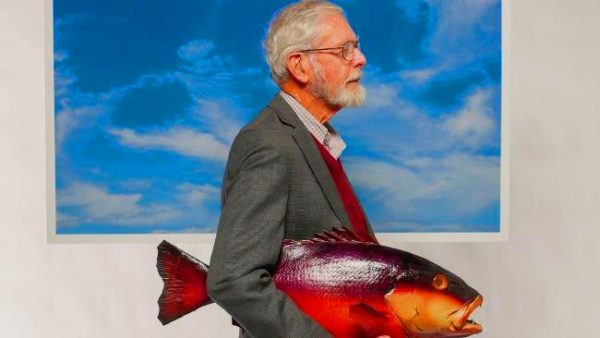 Frank Talbot with a red bass, the species that earned him a PhD. Picture: Australian Museum.

This year’s award goes to… Professor Frank Talbot AM.

As ex-director of the Australian Museum (AM), Professor Frank Talbot AM continues to be an eminent figure in the natural sciences world. A love of the marine environment has been a driving force of Professor Talbot’s throughout his career, in which all things swimming have played a major part. These days, Professor Talbot spends a lot of his time sailing his yacht along the east coast of Australia, however he is never far from the AM and guaranteed smiling face around our research institute.

Last night, the Australian Museum Research Institute recognised Professor Talbot’s achievements in the natural sciences by presenting him with the 2016 AMRI Lifetime Achievement Award. This annual award is presented to a person who has dedicated a large part of their life to scientific research, extending not only our knowledge, but the outreach of science to the wider community. Professor Talbot was deemed a perfect candidate not only for his achievements external to the Museum but because his time as AM director was focused on improving operations for both scientific research and public engagement with our exhibitions, a legacy that has lived through to today.

Professor Talbot’s life has been extremely interesting, even for a scientist! After earning undergraduate degrees and a PhD from his home country of South Africa, Professor Talbot spent some time teaching in England and curating at the South African Museum before moving to Australia in 1964 to take up the position of Curator of Fishes at the AM. By 1966, Professor Talbot had been promoted to the position of Director and during his ten years in the role, instigated some fundamental changes that would ensure the Museum would be a centre of research excellence well in to the future, including the founding of the Lizard Island Research Station.

After leaving the Museum in 1975, Professor Talbot took on many more senior roles including becoming the founding Professor of Environmental Studies at Macquarie University, Executive Director of the California Academy of Science and Director of the US National Museum of Natural History and Man at the Smithsonian Institution.

Professor Talbot’s contribution to the Australian Museum, his students and the wider scientific community has been recognised by all here at the AM and we congratulate him for this well-deserved award.