You are here: Home » Articles filed under: 'News' » Article: 'Refugees as Guides' 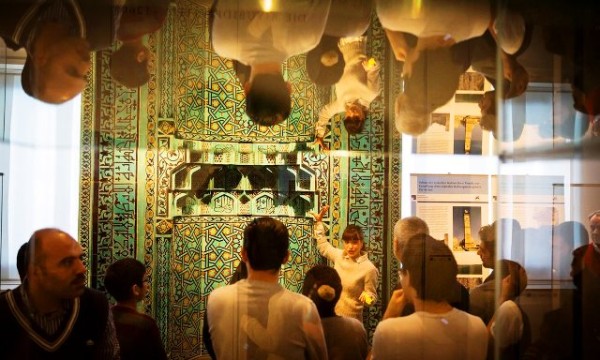 Guide Razan Nassreddine, centre, in front of a prayer niche during a guided tour at the Pergamon museum. Photograph: Gordon Welters for the Guardian.

When Nadiya Mamo stepped into a room on the fourth floor of the Pergamon Museum in Berlin, memories came flooding back. “I could smell the streets of Aleppo, I remembered the colour of the light in my room at dusk,” said the 46-year-old Syrian. “And I remembered how the city that used to be my home turned into living hell within just 48 hours. I think I am only now beginning to understand what that means.”

The 17th-century wood-panelled room, carved with Persian miniatures and biblical scenes by an Iranian artist, used to be located inside a mansion in the historic old town in the north-west of Aleppo. Sold in 1912, the panelling was later donated to the Berlin museum. Recent satellite images suggest its original home is now either damaged or destroyed.

Mamo is one of a group of Syrians who are being shown around the museum’s exhibits thanks to a unique initiative sponsored by Germany’s culture ministry. Last October, 19 refugees in Berlin were recruited and trained as museum guides to provide native-language tours for fellow refugees, with the aim of helping newly arrived people foster connections between Germany’s cultural heritage and their own. The project is called Multaqa, an Arabic word meaning “meeting point”.

When German employers want to hire a refugee, they usually have to prove that they are not discriminating against equally qualified candidates from Germany or the EU – a disincentive for many companies. Berlin’s museums have managed to get around that obstacle by paying their new guides in expenses via the Friends of the Museum for Islamic Art, a non-profit organisation. For each one-hour tour, the guides earn €40.