You are here: Home » Articles filed under: 'News' » Article: 'Repatriations – looking ahead' 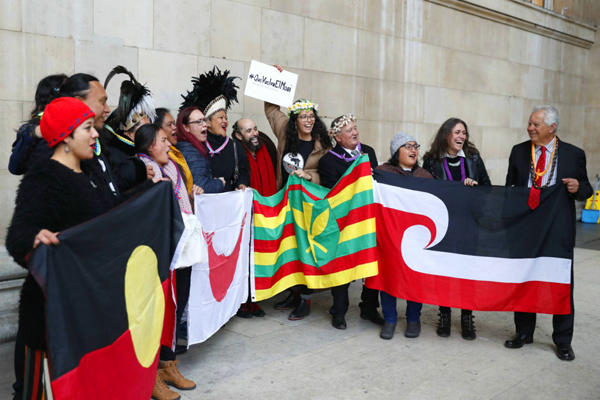 A delegation from Easter Island demonstrate outside the British Museum in London after requesting the return of an ancestor figure, or moai, 2018. (Photo by Adrian Dennis / AFP Getty Images.)

Javier Pes, It’s Not Just Art That Indigenous People Are Fighting to Reclaim From Museums. They Want Their Ancestors’ Remains Back, Too, 29 November 2018

There are thousands of bones, skulls, and even preserved heads of the victims of colonization hidden in museums’ storage. But repatriation is rarely a simple process.

The British Museum, Berlin State Museums, French national museums, and even the Metropolitan Museum of Art in New York all have—quite literally—been keeping skeletons in their closets.

Institutions across Europe and the US face growing calls to return art looted during the colonial era. But there is an even more emotive—and darker—dimension to the problem, of which few museum visitors are likely aware.

Western institutions have thousands of skulls, skeletons, bone fragments, and even preserved heads of Indigenous people that will never be displayed. While some have been or are on their way to being returned to their descendants, others lie hidden deep in storage, living in “museum limbo.”

Typically donated by collectors, missionaries, and colonial officials in the 19th century, these objects are a dark legacy of European’s voracious appetite for “curios” of so-called primitive people. Others were collected as evidence of long-discredited, pseudo-scientific theories of white racial supremacy.

Lou-ann Ika’wega Neel—a descendant of the Mamalillikulla, Da’nax’daxw, Ma’amtagila, ‘Namgis and Kwagiulth tribes of the Kwakwaka’wakw and vice chair of the the First Peoples’ Cultural Council in British Columbia—has been working with the Royal British Columbia Museum to help it return hundreds of human remains and sacred cultural objects. “It’s about closure and reconciliation,” she tells artnet News.

The Skeletons in the Closet

Although they are less visible than objects like the British Museum’s iconic Easter Island head, which was recently subject to a claim by the Rapa Nui people, sacred remains were among the earliest class of objects to enter into the restitution conversation—and they could now serve as an important precedent for other looted colonial-era objects. “Only the restitution of human remains seems to be progressively finding its way into the institutional consciousness,” states a groundbreaking recent report about African artifacts plundered from French museums and commissioned by the French President.

Among the most prized “curios” were the preserved tattooed heads of the Māori people. The grim trade began in 1770, when the aristocratic botanist Joseph Banks arrived in New Zealand and traded a pair of linen drawers for the preserved head of a teenage boy.

Within 50 years, the trade of human remains was banned. But not before hundreds were sold, many of which ended up in museums in Europe and North America. New York’s American Museum of Natural History purchased 35 of them in 1907.

The Museum of New Zealand Te Papa Tongarewa estimates that there are remains of at least 600 known Māori and Moriori ancestors, including their preserved heads, in European museums. This number is dwarfed by the human remains collected from around the world, excluding ancient remains discovered by archaeologists. For example, there are around 5,000 skulls of unknown Africans in Berlin State Museums, which were taken from the former German colony of East Africa (now Rwanda, Tanzania, and Burundi).

By no means do all of the human remains of Indigenous or colonized people date from the 19th century. A few were collected as late at the 1950s. When the Norwegian Thor Heyerdahl sailed the Pacific in 1955, he brought back bones belonging to the Rapa Nui, the Aboriginal Easter Islanders. They are now in Oslo’s Kon-Tiki Museum.

The Met in New York has far fewer modern human remains than its European peers, but the ones it does have are in one of its most celebrated collections. Ten “ancestor-trophy skulls” from West Papua are listed on its website. They are part of the collection donated by Nelson and Mary Rockefeller in 1965 in memory of their son, Michael Rockefeller, who disappeared while on a collecting expedition in the region.

Neel stresses how important it is for communities to know that “their grandparents and great grandparents” are reburied with the correct rituals and ceremonies. Many believe that their ancestors’ spirits cannot rest until their remains are returned. “It is a form of healing,” she says.

The Met’s new director, Max Hollein, oversaw the repatriation of Māori remains at the De Young Museum in San Francisco, where he previously served as director. As the Met embarks on a $70 million overhaul of its Michael C. Rockefeller Wing, Hollein tells artnet News: “Museums have a vital role to play in participating in this complex dialogue, and the Met is committed to identifying and implementing the most respectful treatment of these objects.” The museum has not received any repatriation requests but welcomes discussion with communities about culturally sensitive works in the collection, says a spokesman.

Meanwhile, the creation of an ethnographic museum in Berlin’s planned Humboldt Forum, which is due to have a soft opening next year, has made the issue of human remains a priority in the German capital. The huge project overseen by the Prussian Cultural Heritage Foundation is being closely watched by its international peers. In a surprise move, the foundation’s president Hermann Parzinger pledged to repatriate thousands of human remains to their country of origin. A spokeswoman for the foundation admits that the African skulls inherited from the Charité hospital are in a “deplorable state,” but that provenance research has begun thanks to external funding.

Bringing Back the Dead

Institutional attitudes toward the restitution of human remains have come a long way over the past two decades as a result of pressure from source communities and changing attitudes among some curators and museum directors in the West. But progress has often been slow, and returns, hard-won.

Māori and Moriori communities have achieved notable successes backed by the Museum of New Zealand Te Papa Tongarewa and the New Zealand government. Since 2003, Te Papa has repatriated nearly 500 skeletal remains from museums in the UK, France, Germany, Sweden, and the US. The largest return so far has come from the American Museum of Natural History, which restituted 107 Māori and Moriori ancestral remains in 2014.

Museums that resist claims often cite the research potential as a reason for keeping the remains in storage. But Nick Merriman, who was in charge of the Manchester Museum in the North of England when it willingly agreed to return human remains to New Zealand last May, says there was no evidence that the museum had ever used the objects for research “the entire time they had been in the collection.”

Bremen’s Übersee Museum recently repatriated 44 human remains to New Zealand. The director of the ethnographic museum in north Germany, Wiebke Ahrndt, says that she was surprised when Māori representatives personally thanked the museum for taking care of their ancestors. “We were not expecting that,” she says.