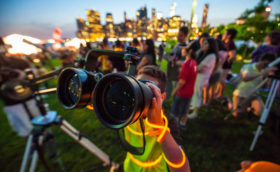 The Issues Paper identifies key areas of research infrastructure capability needed to keep Australian researchers at the forefront of the research endeavour in future decades.

Dr Finkel said identifying key capability areas would allow the Australian Government to focus research national infrastructure investment where it will have the greatest impact.

“If we want world-class research, we need to make sure Australian researchers have access to leading-edge equipment and services,” Dr Finkel said.

“But this paper is a foundation, not a finished proposal.

“We need Australia’s research community, industry groups and other interested parties to provide feedback by having their say on these research infrastructure priorities.” Dr Finkel praised the hard work and dedication of the Expert Working Group and the Capability Experts in the developing the paper.

Submissions are welcome and can be made until 9 September 2016. National consultation sessions will take place from 26 July to 5 September.

The Issues Paper is a key step in the development of the 2016 National Research Infrastructure Roadmap, which will guide future government investment. The Roadmap is due to be released by the end of the year.

The issues paper can be downloaded here.

The consultations and submissions process will close on Friday 9th September 2016.