Naseby is one of my favourite places in Otago. That’s why, when I was invited to take part in an evening of public stargazing at a dark spot near the town, I jumped at the chance, writes Ian Griffin.

The jewel of the Maniototo is seeking to promote itself as a centre for dark-sky tourism, and this ”star party” aimed to get locals and visitors excited about all things astronomical. 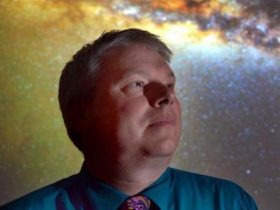 To their credit, Naseby folks do not do things by halves when they throw an astronomical soiree. In addition to a talk by me, they managed to squeeze Otago Museum’s portable planetarium into the town hall. They also arranged for members of the Dunedin Astronomical Society to set up an array of telescopes in the local campground. For one night only, Naseby became a hive of astronomical activity! The event was a huge success, with more than 100 people attending the planetarium shows, talks and telescope viewing.

By chance, although the Naseby event had been in my diary for months, it was scheduled to take place when there would be a high probability of an aurora. You may remember a few columns back I wrote about some beautiful auroras seen across southern New Zealand on August 31 and September 1.

These auroras were caused by a stream of material escaping from a ”coronal hole”, a region on the sun where its magnetic field is open to interplanetary space. Because the sun’s rotation period is well known, the same hole would be facing Earth during my trip to Naseby.

As the star party died down, excited at the prospect of seeing an aurora, I headed off to Mount Buster Rd and set up my camera. Although clouds were advancing from the south, I was absolutely delighted to capture some auroral beams between gaps.

My delight at capturing the southern lights was somewhat tempered by the large dome of light emerging from Ranfurly. The town really does stand out at night. Hopefully, the impending roll-out of shielded streetlights will reduce this effect and Naseby’s night sky will soon get even better.