You are here: Home » Articles filed under: 'News' » Article: 'Return to country' 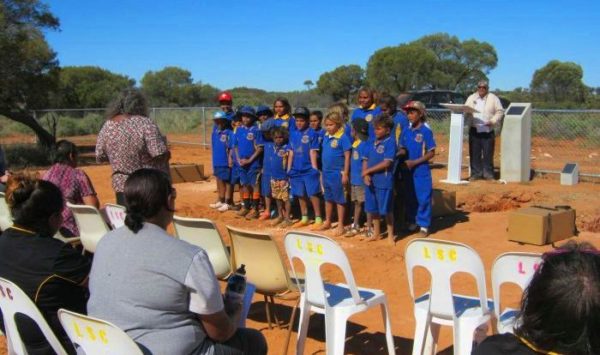 Elders and school children gather at Mount Margaret Mission in the WA’s northern Goldfields for the repatriation of Aboriginal remains (Audience submitted).

Centuries-old Indigenous remains have been given an “emotional” burial ceremony in Western Australia’s northern Goldfields.

Members of the Wongatha community last week gathered at the Mount Margaret cemetery, 900 kilometres east of Perth, to lay their ancestors to rest.

The six sets of ancestral remains had previously been held at various museums around Australia and the world, including the Australian Museum, Hancock Museum in the United Kingdom, and the Charite Medical Museum in Berlin.

For more than 150 years Aboriginal and Torres Strait Islander ancestral remains were removed from communities and placed in museums, universities and private collections overseas.

Returning these remains to country was part of a project organised by the WA Museum’s ongoing Indigenous Repatriation Program.

Scientific testing of human remains provides information about the geographic origin of the ancestral remains.

Goldfields Aboriginal community leader Aubrey Lynch said burying the remains was an emotional process because they likely belonged to his ancestors.