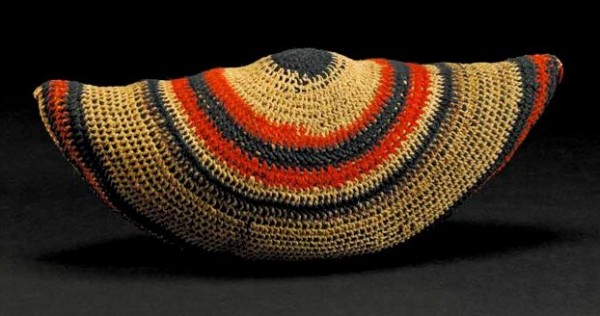 Most of the coverage you might have read or heard about the innovative ‘Encounters‘ exhibition at the National Museum of Australia (NMA – in Canberra) has concentrated on the issue of whether the 152 Indigenous objects borrowed from the British Museum’s 2000-strong Australian collection should be retained in Australia by the 27 tribal/language groups who made them between 200 and 100 years ago.

For instance, Paul Daley in The Guardian, puts it trenchantly: “The traditional owners of these objects acquired by Europeans in early encounters and now in the British Museum, are certainly denied genuine choice (for now) about where they are best kept”, a situation he sees as “part of a colonial continuum”. In other words, the dastardly NMA persists in the sort of History Wars/White Blindfold attitudes that sprouted so embarrassingly in the Howard years when Queenie Mckenzie’s painting of the Mistake Creek Massacre was bought and immediately hidden in a basement by the NMA Board of that day.

I differ – as does Wiradjuri artist Jonathan Jones, who was quoted in the British Museum version of this show earlier this year saying, “Making these connections begins to undo the acts of colonialism”.

I see the fact that today’s communities now have a choice about their relationship with these ‘disappeared’ objects as being the most relevant thing. Without the theft/exchanging/collecting habits of colonials – especially the British Navy of all people – and the enthusiastic museology of the Brits (for all Australia’s comparable collection of tribal objects was incinerated with the Garden Palace in Sydney in 1888), none of these magical artefacts would exist today. For nomadic peoples had no interest in conserving objects after their practical or ceremonial purposes had been expended. And most white interlopers had distressingly little interest in taking the objects or their makers seriously enough to record this culture. So the connections made today over the 3 year preparatory period for the two exhibitions have generally excited Traditional Owners, many of whom have contributed on a very equal basis to the objects in the NMA’s exhibition.