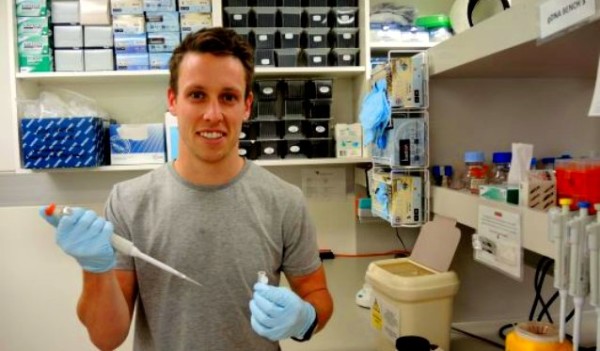 A quick Q&A with the scientist they call #RhinoGuy

Kyle Ewart’s work in wildlife forensics, and particularly his development of a rapid test for rhino DNA in aid of stopping the illegal horn trade, has thrown a light on the young scientist from his peers at Triple J.

Did you always know you wanted to be a scientist?
From a very young age I’ve always been fascinated with science, in particular wildlife. I had some other career paths in mind (e.g. chef and soccer player) but regardless I always knew I would end up doing science.

How did you become interested in the area of illegal wildlife trade?
I found out about the horrific scale of the illegal wildlife trade during my studies at university; but it wasn’t until my supervisor (AMRI Director Dr Rebecca Johnson) gave a talk about wildlife forensics to my year group that I realised what role science can play in combatting the trade of illegal wildlife. It was after that that I decided to pursue a career in wildlife genomics and wildlife forensics. I then approached the Australian Museum about doing a project within this field – they needed a student for a rhino horn project which fitted my interests perfectly.

In a world full of bad news about the environment and threatened species, what are we getting right?
There is a lot of good science being done around the world, and you can’t argue with good science. If we as scientists can keep producing robust and relevant science, we can inform decision makers and improve the way we treat our environment and help protect threatened species. In particular, wildlife forensic science research will help increase convictions of wildlife traffickers, and hence deter poaching. Other than the work we have done on the identification of rhino horn, we are doing a number of other wildlife forensic projects here at the AM; projects such as improving forensic techniques to detect other mammal, reptile and bird trafficking. Around the world we are seeing a change in the outcomes of wildlife trafficking cases. The punishments are becoming more severe and more frequent, but there’s still a long way to go.

If you had a time machine that could take you to any point in the past or future, where would you go and why?
I would take a glimpse into the past before humans were so dominant. Seeing the environment and Earth’s biodiversity before we interfered would be truly incredible. However I’m not sure how long I would survive in the wild!