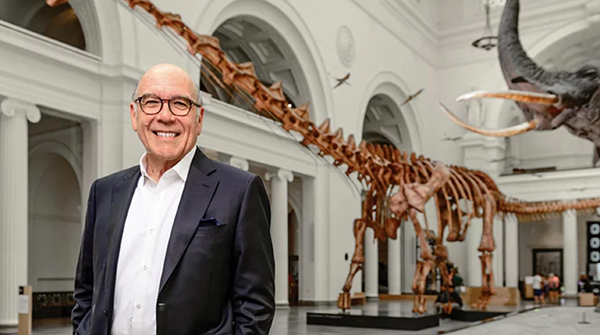 CEO Richard Lariviere has fixed the Field’s finances and is renovating its outdated Native North America Hall. Can he keep the momentum going?

Richard Lariviere inherited a mess when he became CEO of the Field Museum seven years ago. The museum was borrowing heavily to pay for capital expenses. It hadn’t gotten a seven-figure donation from a living person since Marshall Field’s $8 million gift to launch the museum some 120 years ago. The museum’s bond ratings, then A2 with a negative outlook, were on the brink of being downgraded. “There was a great financial weakness” at the museum, says longtime trustee and former board chair Connie Keller. “We really needed to shore up our finances and our science.”

Lariviere also had a cringeworthy problem on his hands: the Native North America Hall, a context-free exhibit of faceless mannequins wearing tribal dress, with a diorama of stampeding bison thrown in for good measure. “From day one, I was embarrassed by the Native North America Hall,” says Lariviere, 69. Turns out that the exhibits, untouched for five decades, were also offensive to Native Americans, who weren’t shy about sharing their opinions with Lariviere. “I hadn’t really thought of it from that perspective,” he says.

The $17 million renovation of the North America Hall, done with input upfront from the Native American community and scholars from around the country, will reopen in 2021. Field Museum isn’t the only institution grappling with this issue. In April, the Art Institute of Chicago postponed a show of ancient Native American pottery over concerns that the show was culturally insensitive. “When museums were first founded in the 19th century, they sought to represent the distant and foreign to local communities,” says Andrew Hamilton, associate curator of art of the Americas at the Art Institute. “However, our institutions were a product of colonialism. As we confront these legacies, it’s necessary for us to reinvent museums as more inclusive spaces.”

Lariviere has addressed pretty much every issue he found when he arrived in 2012. The museum’s endowment has grown to $435 million from $299 million in 2012. Bond ratings have improved, to A2 with a stable outlook, and the museum has not had to tap its line of credit since January 2017. It’s gotten that big gift and then some, from Citadel founder Ken Griffin. Griffin’s donations, $21.5 million total, have paid for the Griffin Dinosaur Experience, including Maximo, a cast of the world’s biggest dinosaur, and opened the Griffin Halls of Evolving Planet, which chronicle the earth’s history from its beginnings. (an updated Sue, the T. rex skeleton once featured in the museum’s Stanley Field Hall, is now the centerpiece of Evolving Planet.) In September, the museum launched “Because Earth,” a $250 million fundraising campaign that will pay for new exhibits, renovations of existing ones and accessibility efforts, plus underwrite the museum’s global science efforts.

Attendance has gone up to about 1.4 million annually from 1.2 million since Lariviere’s arrival. The Field generally posts modest attendance increases every year (blockbuster exhibits notwithstanding), in line with that at other major cultural attractions such as Adler Planetarium, the Shedd Aquarium, the Art Institute and Museum of Science & Industry.

Lariviere, born in Chicago and raised in rural Iowa, has two big items left on his to-do list. One is maintaining the foothold in science as some parts of society become vehemently anti-science. “We see ourselves as advocates for the facts,” Lariviere says, noting that the museum was the only one to officially participate in the 2017 March for Science, held to protest, among other things, climate-change deniers. (Representatives of Adler Planetarium, Shedd Aquarium and the Museum of Science & Industry say they held events to commemorate the day, and that various staffers marched, but they steered clear of institutional involvement because of the march’s political origins.)

The other is walking the fine line of entertaining museum visitors without dumbing down science. “The public is hungry to know what’s going on, and we need to be able to tell them without requiring a master’s degree in microbiology,” Lariviere says. An unusual fossil, discovered in 1958 and identified in 2016, has the name Tully Monster, after the collector who found it. “The word ‘monster’ gets everyone’s attention,” Lariviere says. When a scientist uses an X-ray gun to study a piece of ancient pottery, the museum plays up the X-ray aspect. Lariviere has also pushed the museum’s work out into the open, visible to visitors. Here and there, scientists work behind glass partitions, retrieving fossils from beds of mud and restoring artifacts from the museum’s collection.

The Field Museum is Lariviere’s first non-university post. He most recently was president of the University of Oregon from 2009 to 2011 and was credited with boosting attendance in the system. Lariviere was fired by the Oregon State Board of Education over disagreements about how the university should be governed.

He and Field board members say his background in academia has served the museum well. “He is a very unusual, unique melding of a scholar who appreciates and understands the value of research,” says Bobby Mehta, trustee and executive committee member and former TransUnion CEO. “He is also able to put on a business hat and say, ‘Here’s how we need to make decisions, here’s what we need to do with the resources we have.’ ”

Lariviere also helped organize the world’s 12 top natural-history museums into an association of institutions that possess 500 million natural-history specimens, or about 40 percent of the world’s total. That work, and his work at the museum, earn him the respect of colleagues who remember the pre-Lariviere Field Museum. “The museum had gone through a rough patch,” says Johannes Vogel, director general of the Natural History Museum in Berlin. “Everything had suffered—reputation, staff, science.” These days, “it is forward-looking, supports excellent research and has stunning exhibitions,” Vogel says. “What an achievement.”