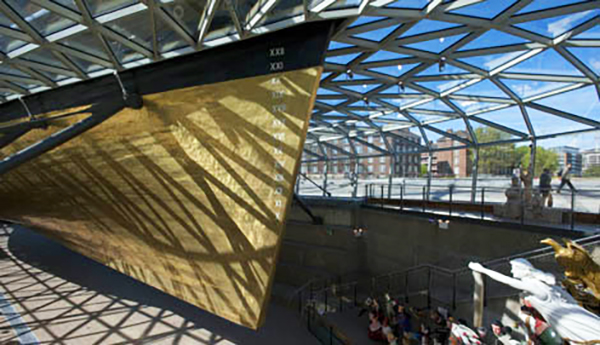 Change is in the air at two of the UK’s biggest national institutions. Last week, Royal Museums Greenwich (RMG) announced that its next director would be Paddy Rodgers, a respected figure in the shipping industry but a relative unknown in the museum world. Meanwhile, at the Natural History Museum (NHM), director Michael Dixon revealed that he was planning to retire after 15 years at the helm.

The announcements have caused a few ripples. Rodgers, who is due to take over from outgoing director Kevin Fewster in August, spent 19 years as chief executive of Euronav, a crude oil tanker company. He first qualified as a solicitor and spent a number of years working in shipping in Hong Kong.

Rodgers’ industry background and international ties clearly won him favour with RMG. The organisation’s chair of trustees, Charles Dunstone, praised Rodgers’s “first-class links in the maritime industries”, while RMG said in a further statement that “he is steeped in the contemporary maritime world and has taken a keen interest in safety, quality and the environment”. Rodgers has existing links to RMG as a Life Patron, and ran a half-marathon last year to raise funds for the Royal Observatory’s Altazimuth Pavilion refurbishment.

Rodgers’ record at Euranov is eye-catching. He joined the company in 2000 and took it from a family-run operation with 17 vessels to one of the largest crude oil companies in the world, with a 73-strong fleet. It’s clear that RMG intends to use this business acumen to build on Fewster’s successful record, which saw the organisation more than double its visitor numbers during the 12 years he spent there.

Rodgers will still be responsible for one ship in his new role – the Cutty Sark – as well as the National Maritime Museum, the Royal Observatory, and the 17th-century Queen’s House. He says he is “delighted and excited to be joining the team and to lead the museum into a bright and sustainable future”.

Rodgers’s career shift surprised many of his colleagues in shipping – and his lack of previous culture or heritage experience has also raised eyebrows in the museum sector. One curator wrote sarcastically on social media: “You can become director of a major national museum even if you don’t fulfil all the criteria on a job spec! There’s hope for us all*! (*white men)”. Appointments from other sectors are not an entirely new phenomenon among national museums; the NHM’s Dixon did not have a museum background either, having joined the organisation in 2004 from the Zoological Society.

Other commentators have questioned what the appointment of a figure with close ties to the fossil fuel industry says about RMG’s commitment to environmental and climate issues. For his part, Rodgers is described as having “robust views” on environmental sustainability; in an interview with the shipping journal Lloyds List about his new role, he said he was interested in exploring “the carbon impact of shipping”.

The newcomer at the NHM is likely to be scrutinised just as closely. With responsibility for a collection of more than 80 million specimens, Dixon’s successor will have to maintain the institution’s position as a global centre for biodiversity and scientific expertise, as well as continuing to expand the venue’s visitor figures, which doubled to 5.5 million during his tenure.

The vacancy is likely to attract an international field of candidates and the NHM hopes the new director will be in place by late 2020, giving Dixon a chance to oversee the first year of the museum’s soon-to-be-launched Strategy to 2031 masterplan.

Across the Atlantic, the announcement that Lonnie Bunch is to be the first African American secretary of the Smithsonian Institution in the US has put the lack of diversity among the UK’s national museum leaders into sharp focus. While progress has been made at closing the gender gap in recent years, with the recruitment of Maria Balshaw at Tate, Laura Pye at National Museums Liverpool and Kathryn Thomson at National Museums Northern Ireland, the UK is yet to have a black director at any of its national museums. Recent developments indicate that – for now at least – plus ça change.

Correction, 14.06.2019
The article originally stated that the UK has never had a Bame director at any of its national institutions. In fact, Abraham Thomas was the UK’s first Asian national museum director and was at the helm of Sir John Soane’s Museum between 2013 and 2015.