August 6th, 2021 | Browse other: News. | Tagged with: autonoeisis - the capacity to be aware of one’s own existence as an entity in time, Robert Macfarlane on linking navigation to our ability to tell stories about ourselves | 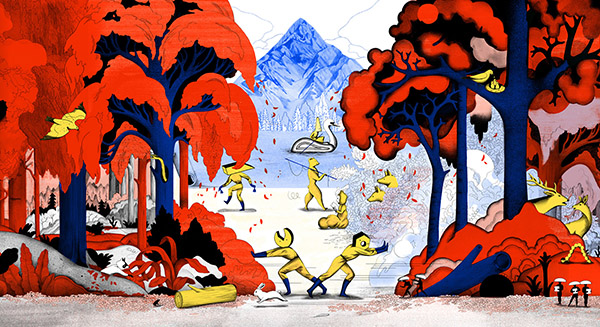 Robert Macfarlane, The Landscapes Inside Us, The New York Review, 1 July 2021

Our navigational ability as a species is closely connected to our ability to tell stories about ourselves that unfold both backward and forward in time.

It is a little-known fact that limpets are brilliant navigators. Renowned for their ability to hold fast, they are surprisingly mobile. When submerged by the incoming tide, limpets set out on a slow journey across the intertidal boulders of their habitat. They move using a single muscular foot, rather as snails do, and deploy a rough tongue-like organ, known as a radula, to scrape the algae and young seaweed they consume off the rock surface. Once they have finished a foraging journey, each of these eyeless monopods then navigates back across the boulder to its “home,” a site on the boulder’s surface where it has rotated its shell back and forth repeatedly, such that it has incised an outline of itself into the rock. There it securely settles into its groove, ready to endure another cycle of hammering waves and pecking gulls.

Animal navigation is rich with such miracles and puzzles. “The greatest migration on earth belongs to the Arctic tern,” M.R. O’Connor writes in Wayfinding, “a four-ounce argonaut that travels each year from Greenland to Antarctica and back again, a distance of some forty-four thousand miles.” Meanwhile, every twenty-four hours, billions of tons of biomass in the form of plankton undertake what O’Connor calls “an intentional vertical migration, rising to the surface of the ocean at twilight and descending at sunrise.” Bees, O’Connor notes, will meander out on long nectar-hunting trips, moving haphazardly from bloom to bloom, but when their work is done they will fly the shortest route possible back to the hive: the “beeline.” This remarkable spatial calculation is achieved despite bees being almost blind by human standards and having brains that weigh less than a milligram and contain fewer than a million neurons. Back at the hive they engage in what is known as the “waggle dance,” which appears to be a choreographic means of communicating complex wayfinding information to fellow bees.

The science of creaturely navigation is a contested research area, but as O’Connor reports, it is widely thought that many animals have what is called a “bio-compass” that allows them to use the Earth’s magnetic field to find their way. Magnetite has been found in the brains of mole rats, the upper beaks of homing pigeons, and the olfactory cells of rainbow trout. Live carp floating in tubs at fish markets tend to align themselves along a north-south axis. Red foxes mostly pounce on mice in a northeasterly direction. Dog owners, take note: your dog may well swing round to face north-south when it crouches to relieve itself.

Humans don’t possess inbuilt bio-compasses, but we do have something arguably more powerful: storytelling. Our remarkable navigational ability as a species is closely connected to our ability to tell stories about ourselves that unfold both backward and forward in time. For some evolutionary psychologists, this capacity for “autonoeisis”—what O’Connor describes as “the capacity to be aware of one’s own existence as an entity in time”—is what made us such good hunters. Faced with the tracks left by a prey animal, early humans were able to imagine beyond the immediately visible, reading those signs for what they might foretell as well as what they recorded: This deer’s prints show it to be wounded…We are driving this herd of bison into a box canyon, where they will be trapped…We excelled at tracking because we could generate what Michael Bond, in From Here to There: The Art and Science of Finding and Losing Our Way, calls “mental representations of the outside world that we can use to get around and orientate ourselves.”

“If we opened people up, we would find landscapes,” Agnès Varda observes in The Beaches of Agnès (2008), the autobiographical film she made when she was about to turn eighty, which tells a version of her life through the places she loved, among them the River Seine and the Belgian coastline. As metaphor, this is a gothic proposition: that we internalize certain terrains so fully they become part of us, visible to others only when the surgeon’s scalpel or the pathologist’s bone-saw begins its excavatory work. As physiology, it seems nonsense. Over the past half-century, however, neuroscientists have made a series of remarkable discoveries about the ways human brains perceive, process, and store our passage through space.