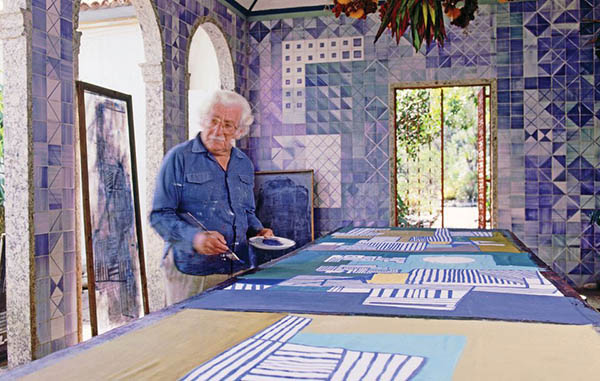 Roberto Burle Marx, painting in the loggia of his home in the 1980s© Claus Meyer/Tyba, courtesy of the New York Botanical Garden.

Brazil funds a major renovation of landscape architect’s lush estate, which could become a World Heritage site in 2020.

A lush 41-acre botanical garden and museum west of Rio de Janeiro, where the Brazilian landscape architect and artist Roberto Burle Marx lived and worked from 1973 until his death in 1994, could become a Unesco World Heritage site in 2020. The Sítio Roberto Burle Marx has already won a boost of 5.4m reais (around $1.4m) in federal funding for a major overhaul regardless of the outcome of Unesco’s evaluation, which is planned for September.

The site is home to more than 3,500 tropical plant species, some of which are endangered or extinct in their native habitats

Brazil’s National Historic and Artistic Heritage Institute has managed the property since Burle Marx donated it to the federal government in 1985. It has a collection of more than 3,000 works by the artist, including painted tiles in a reception hall, and reflecting pools and grottos which he designed. The site is also home to more than 3,500 tropical plant species, some of which are endangered or extinct in their native habitats.

The renovation, which is underway, aims to “strengthen the role of the site as an institution of memory of the life and work of Burle Marx, and to disseminate the importance of the site’s botanical collection as a research source and genetic bank”, as well as improve visitor experience, says the director Claudia Storino. The site “has the capacity to more than triple” its current average of 1,000 visitors a month, she says.

Burle Marx’s main home on the property, which holds his art collection, furniture and personal belongings, will be given upgrades such as new lighting; the site’s botanical laboratories and administrative buildings will also be renovated.