You are here: Home » Articles filed under: 'News' » Article: 'Role of Advocacy for NFPs'

Role of Advocacy for NFPs

November 29th, 2015 | Browse other: News. | Tagged with: role of advocacy, sector collaboration, State of the Not for Profit Sector survey | 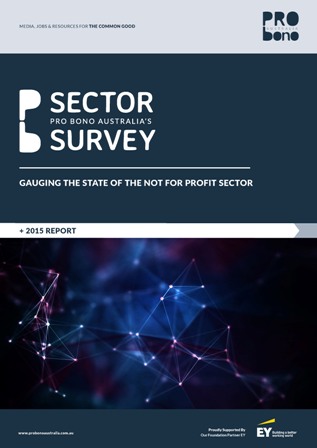 State of the Not for Profit Sector survey report

The role of advocacy, sector collaboration and improving the method of government funding agreements are the top priorities for Australia’s Not for Profit sector, according to the 2015 national survey by Pro Bono Australia.

The national online State of the Not for Profit Sector survey of 1100 leaders, volunteers and sector managers reveals that the recognition of the role of advocacy by Not for Profit organisations is key to creating a thriving future for the sector.

Survey collaborator, Les Hems, a Director within the Transaction Advisory Team of Ernst & Young (EY), said almost nine out of 10 respondents (or 89 per cent) thought the recognition of the sector’s advocacy role was important and another two thirds (63 per cent) described it as extremely important.

The survey results coincide with the second anniversary of the Coalition Government, the removal of Tony Abbott as Prime Minister in favour of Malcolm Turnbull and a period in which the Government has been accused of attacking advocacy, including a Parliamentary Inquiry into the Register of Environmental Organisations around their advocacy rights and tax deductibility status.

Hems said the sector identified collaboration with other organisations, including collective impact, as having a positive impact on the performance of their organisation over the past year and that this impact would continue in 2016.

The high priority given to both advocacy and collaboration comes as Australia’s sector leaders joined forces recently to advocate for change urging hundreds of charities to merge or shut down as the best way to use dwindling government funding and increase their outcomes.