You are here: Home » Articles filed under: 'News' » Article: 'Rosetta Stone of dinosaurs acquired by MV' 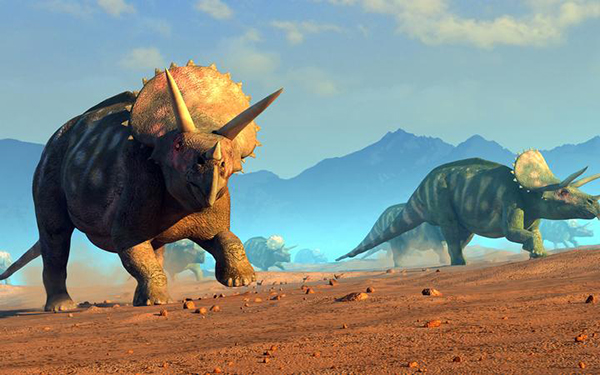 Illustration of a herd of triceratops dinosaurs. The creatures were common in the late Cretaceous period. Photo: AFP.

Christmas has come early at the Melbourne Museum, but it’s been 60 million years in the making.

The museum will soon be home to the most complete Triceratops fossil ever found. It’s been called the Rosetta Stone of dinosaurs.

A team of experts are excavating the 1000kg dinosaur from the rock it is encased and it will go on display in 2021.

Chief executive and director of Museums Victoria, Lynley Crosswell, told Morning Report it was a first for Australasia and that having one of the most iconic dinosaurs in the world going on display in such detail was causing excitement as staff prepared for its arrival.

“It’s still being painstakingly extracted from rock over at a laboratory in Canada right now,” she said.

The skeletal remains were found in Hell Creek – an arid isolated region in ‘the badlands’ of Montana.

“Sixty-seven million years ago in the cretaceous period, a period when triceratops roamed, it was very lush, so perfect environment for a herbivore.”

The quality of preservation of the dinosaur was remarkable, to the point that skin fragments, tendons and even stomach contents were evident.

“There are very few triceratops that have ever been found of this quality and we believe that it could be the highest quality ever found at this point in time.

The stomach contents had yet to be analysed and scars on the dinosaur’s back were also being looked at.

“By the time it goes on display next year, these stories will have been much more fully revealed and we’ll bring this creature to life for people,” Crosswell said.