September 27th, 2018 | Browse other: News. | Tagged with: art of the peoples of the Pacific Islands, Royal Academy’s Oceania exhibition |

Maia Jessop Nuku, A journey through the art of Oceania, The Royal Academy of Arts, 23 August 2018 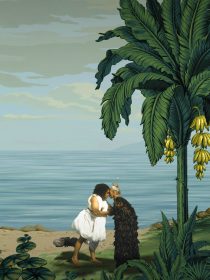 As the RA mounts its groundbreaking exhibition on the art of the peoples of the Pacific Islands, Maia Jessop Nuku introduces its themes of voyaging, encountering and place-making.

It was Arthur C. Clarke who wondered if we hadn’t perhaps misnamed our planet by calling it Earth: “How inappropriate”, he insisted, “to call this planet Earth when it is quite clearly Ocean”. Occupying almost one-third of Earth’s surface, the Pacific is not only the largest ocean but the largest single geographical area on the planet, a vast realm of astonishing diversity that continues to capture the imagination. Oceania comprises some 20,000 of its islands and close to 1,800 different cultures and language groups that share common ancestry.

It was the last region of the world to become settled by humans; populations speaking languages from the Austronesian language family moved into the region 60,000 years ago, travelling eastwards from the islands of South-east Asia to settle in present-day New Guinea. Some 30,000 years later a generation of seafarers pushed the known limits of the world further, sailing across the straits to settle Melanesian archipelagos off the coast of New Guinea. Remarkably, the final exploration north and eastwards into Micronesia and Polynesia began just over three millennia ago. Technological refinements and navigational expertise led to increasingly bold voyages that took double-hulled outrigger canoes across vast distances. The outer limits of these migrations delineate the boundaries of present-day Polynesia, with Hawaii and Easter Island to the north and east respectively, and New Zealand – the final destination where Māori established themselves as recently as 1200 CE – to the south.

The astounding mobility of Oceanic peoples was a catalyst for the flourishing of an almost kaleidoscopic range of cultures and art traditions. While communities adapted to circumstances in each new environment, water was, of course, a constant element, sustaining life and shaping cosmological belief systems. From the rivers and swamps of dense rainforests to the tranquil lagoons that encircle coral atolls, the ocean and its watery depths were enlisted as metaphors of history and identity, marking the spiritual passage between life and death. To this day metaphysical waterways convey the recently deceased to the potent underworlds of Pulotu and Hawaiki, ancestral homelands where the spirits of one’s antecedents are believed to dwell.

The Royal Academy’s exhibition Oceania presents the region’s distinctive landscape as a vital and deeply interconnected highway that links Pacific peoples together in a network of dynamic exchange and encounter. It includes an astonishing array of some 200 artworks, ranging from 14th-century carving to 21st-century painting – such as Niuean artist John Pule’s 10-metre-wide, 2.7-metre-high odyssey Kehe tau hauaga foou (To all new arrivals) (2007; above). The show is structured around three key themes that guide the visitor and reinforce the close conceptual underpinnings that connect what appear (on a formal level at least) to be radically distinct art traditions. “Voyaging” evokes the extraordinary story of navigation across this vast landscape, presenting the arts associated with ocean travel: decorated paddles and immaculately executed fishhooks are accorded ritual, as well as practical, purpose; exquisitely carved canoe sterns and highly embellished prow figures from the Solomon Islands are inlaid with sections of shell designed to catch the light. An iconic navigational chart from the Marshall Islands (below) is deceptively simple: this knotted grid of sticks was not intended as a literal map but was deployed as a mnemonic device to unlock the wealth of intangible knowledge required for long-distance voyaging. Using visual and sensory cues from the atmosphere, highly skilled priest-navigators learned to “read” their way through the constantly shifting landscape of the ocean; fixing a star or constellation as a point of reference in the sky, they were able to carve out pathways to arrive at their destination.

A second theme – “Making Place” – explores the extraordinarily innovative ways in which Islanders created and inhabited homelands in these vastly distinctive geographies, establishing dwellings on sacred sites where they might interact with their gods in the strip of existence afforded them between ocean and sky. The artworks in this section of the show tell a multitude of stories relating to origins, ancestral power, performance, secrecy and initiation. They include some of the great masterpieces of Oceanic art, such as carved and elaborately painted façades of ceremonial houses, crocodile reliquaries from the Sepik region of New Guinea and spectacular turtle shell masks from the Torres Strait Islands.

The final theme – “Encounter” – explores a range of defining moments grounded in early indigenous encounters that consumed rival clans in inter-island warfare and localised raids that sought to settle disputes and restore cosmological balance. The Enlightenment era of scientific exploration, which began in earnest with Captain Cook’s first voyage to the Pacific region in 1768 – the year in which the Royal Academy of Arts was founded by Royal Charter – launched a dramatic new epoch of encounter between the Oceanic cultures now long-established in the region and the emerging European nations whose tall-masted ships now ventured into the maritime theatre of the Pacific. This colonial encounter was of course seismic in scale, and its reeling effects are still being processed by indigenous peoples today – it kick-started an era marked as much by misunderstanding, violence and tragedy as by the sharing and mutual curiosity of “discovery”.

Now, 250 years later, the dynamics of power that motivated this extraordinary collision of two worlds have been creatively reimagined in a video installation, in Pursuit of Venus [infected] (2015–17), by leading Māori artist Lisa Reihana. Inspired by a set of early 19th-century French wallpaper panels, Reihana reconfigures their Eurocentric vision of an exotic and largely acquiescent Pacific paradise with a series of vignettes that celebrate the agency and customary knowledge of contemporary Islanders. These intriguing scenes unravel and complicate the daily encounters that took place on 18th-century Pacific beaches between Islanders and Cook’s crew. Fraught with tension and a constant backdrop of threatened violence, the piece is peppered with humour and incident, building in drama to end finally in tragedy.