You are here: Home » Articles filed under: 'News' » Article: 'Running the numbers on US History Museums'

Running the numbers on US History Museums 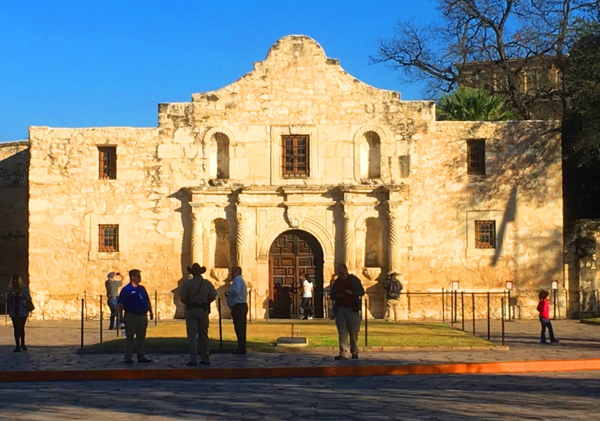 In 1836, the chapel of the Mission San Antonio de Valero, commonly called “the Alamo” was the site of a notable battle of the Texas Revolution (photo by the author).

Bob Beatty, Running the Numbers on Attendance at History Museums in the US, Hyperallergic, 1 March 2018

In attempting to gauge whether attendance at American cultural institutions is indeed declining, many commentators often conflate “museum” with “art museum,” but art museums comprise only about 4.5% of American museums, while history institutions, comprise about 55.5%.

FRANKLIN, Tenn — Last month, Seph Rodney posted “Is Art Museum Attendance Declining Across the US?” Rodney’s post intrigued me, not only because of its subject matter, but also because he clearly defined his argument around art museums and not museums as a whole. While attendance at American cultural institutions may indeed be declining, art museums comprise only about 4.5% of American museums, according to data from the Institute for Museum and Library Services (IMLS, the federal agency in charge of gathering such information). History institutions, on the other hand, comprise about 55.5%of the American museum community, with an additional 33% identifying as “general” museums — many of which, I am confident, also contain significant amounts of history within. (For the purposes of this blog post, I am using the IMLS eligibility criteria for institutions seeking grants: “Museums include, but are not limited to, aquariums, arboretums, art museums, botanical gardens, children’s/youth museums, general museums, historic houses/sites, history museums, natural history/anthropology museums, nature centers, planetariums, science/technology centers, specialized museums, and zoological parks.”)

As one who has labored in the field of history museums for the past two decades, I very much appreciated that Rodney specifically broke out the data for art museums. I have observed over the past several years that many commentators often conflate “museum” with “art museum.” This sends a misleading message to the museum field and to the US public. It leaves one wondering whether art museum trends are reflective of the American museum community as a whole, and what data exist that supports or refutes this notion?

Rodney’s post examined art museum visitation based on the Survey for Public Participation in the Arts by the National Endowment for the Arts, which did track an overall decline of about 20% in art museum attendance from 2002–2012. But given that 95% of American museums are not art museums, we cannot automatically assume that their attendance woes reflect all museums. Understanding this led me to seek out data on trends for history institutions nationwide (which also include museums, historic sites, and historic houses) — organizations that people have the most immediate access to because of their sheer ubiquity.

While there are data available, an overarching study like that which Rodney cited is lacking for the history museum field. The NEA’s survey — aimed mostly at participation in the arts — claims a decline in attendance at historic sites only (not museums), which the American Academy of Arts and Sciences tracks in its Humanities Indicators. The Indicators report some disturbing trends:

In sum, Americans were 50% less likely to visit a historic site in 2012 than they were in 1982! (This information is now at least five years old.)

Colonial Williamsburg, perhaps the nation’s most famous outdoor history museum, whose name recognition probably rivals the Smithsonian’s, reflects this trend. It has long struggled with attendance, dropping from annual highs of one million visitors in the 1980s to less than a half-million in 2016, according to The Federalist. However, two of its peer organizations reported attendance gains of late: 8.7% in 2017 for Conner Prairie in Fishers, Indiana and 5% in 2016 for The Henry Ford in Dearborn, Michigan. The reports are also good from 507 national respondents to a survey conducted by Edge Research on behalf of the National Trust for Historic Preservation. In it, 62% reported an increase in visitors over the past five years, with another 24% reporting no change. In the last twelve months, 42% related attendance gains, with 45% demonstrating no change at all. But this measure, like the Humanities Indicators report, only examines historic sites, meaning museums with large annual attendance such as the Smithsonian’s National Air and Space Museum or Rochester’s Strong National Museum of Play aren’t included in the study.

The Themed Entertainment Association’s TEA/AECOM 2016 Theme Index and Museum Index: The Global Attractions Attendance Report shares a list of the 20 most-attended museums in the United States. I identify four of these as museums with a history focus: the U.S. Holocaust Memorial Museum, the National Air and Space Museum, the National Museum of American History, and the Udvar-Hazy Center of the Smithsonian. Of the four, Air and Space, which many see as a science museum, showed an 8.7% jump in attendance, the Holocaust museum and Udvar-Hazy had no change, and the National Museum of American History declined by 7.3 percent. Overall, however, the history museums on this list had a net gain of 300,000 visitors. But these represent only four of an estimated 18,315 organizations that the IMLS counts as history museums. So, we have four of America’s most-attended history museums showing a collective net annual gain, two of three major outdoor historic sites citing recent annual gains, and only 14% of historic sites in a recent study showing a decline.

One thing is very clear though. According to my colleague Colleen Dilenschneider, Chief Market Engagement Officer at IMPACTS Research & Development, a data and technology company, museum attendance as a whole (art, history, or otherwise) is not keeping up with the United States population.  IMPACTS has been tracking 224 visitor serving organizations and runs an ongoing study with more than 108,000 representative participants in the US. Their latest findings: a net loss in attendance due to negative substitution. “For every one historic visitor who leaves the U.S. market (by way of death, relocation, or migration),” Dilenschneider writes, “they are being replaced by only 0.948 of a person.” This means that over the course of just three visitation cycles, a museum with 1 million visitors would see 948,000 in 2018, 899,000 in 2019, etc.

Does size matter when it comes to the attendance challenges museums are having? Of the 18,000+ history museums in this country, half of them, according to the American Association for State and Local History, have budgets of under $250,000 a year, with another half of these with annual budgets of less than $50,000. Few, if any of these, factor into the information I found, though Dilenschneider’s research shows very little difference between the type of person who visits a smaller versus a larger museum. The data also demonstrate history museums attract a similar visitor to art museums (which validates my long-held hunch that museum goers are museum goers).

Research from another colleague, Susie Wilkening of Wilkening Consulting, shows that younger adults are consistently about 50% more likely to have visited a museum (of any type) in the past year than older adults. This indicates that museums have an opportunity to grow audiences, but only if they maintain engagement throughout visitors’ lifetimes by providing valued experiences.

Perhaps, then, the question isn’t whether or not attendance is lagging at US museums, but, rather, why that is, and what can and should be done about this lag.

Engagement, I believe, is the most important issue. I’ve long been flummoxed by the museum field’s inability to measure its public value beyond attendance and membership or economic measures (which fare very well according a recent study by to the American Alliance of Museums). I wrote my master’s thesis on the topic of civic engagement/public value and have written several times about this of late: Measuring Effectiveness and Will We Ever Effectively Measure the Public Value of Museums?

Flagging attendance is a worry, but social engagement is a greater concern to me. Perhaps the lower attendance rates the NEA reports for art museums — those institutions for which we have the most hard data — is because these institutions aren’t providing what their audiences most want and/or value.

In his post that inspired this response, Rodney wrote,

[Th]ere is evidence that people are becoming less inclined to visit museums and galleries, and for those of us (like me) who are invested in these institutions as one of the key bulwarks against the encroaching colonization of civic space and engagement by the relentless commodification of experience, this is dispiriting news.

But there is hope. And that hope lies not only in the art museums in the United States, but in the entirety of experience that American museums of all types offer our citizens to engage more deeply in the humanities. As philosopher Martha C. Nussbaum wrote in 2010, these explorations represent,

the faculties of thought and imagination that make us human and make our relationships rich human relationships, rather than relationships of mere use and manipulation. When we meet in society, if we have not learned to see both self and other in that way, imagining in one another inner faculties of thought and emotion, democracy is bound to fail, because democracy is built upon respect and concern, and these in turn are built upon the ability to see other people as human beings, not simply as objects.

Americans understand that museums provide these experiences (a recent study by Wilkening Consulting and the American Alliance of Museumsproved). Museums should build on this understanding, and expand value at the local level, more so than we should lament flagging attendance at larger institutions.