New research suggests that children learn best when allowed to zoom about in galleries and museums – but what about everyone else? Michelle Warwicker weighs the arguments.

If quiet pondering in art galleries is your thing, chances are you have been laying low in recent weeks, waiting for the boisterous school holiday crowds to pass by. Buggies fill the spaces and children’s shrieks and chatter fill the air as parents seek to occupy their energetic offspring for the day.

Art galleries are no longer places of reverent observation and hushed whispers. Many institutions increasingly court families with young children and some have developed immersive and interactive displays. The Metropolitan Museum of Art in New York and Tate Modern in London both offer child-friendly exhibits and activities, and suggest itineraries for their tiniest visitors. “It’s OK to talk at Tate!” says the latter in its visiting tips for families.

Running – and indeed dancing and jumping – around public spaces such as museums and art galleries is a subject that Abigail Hackett, a research associate at the University of Sheffield has been studying since 2012. All that movement helps children under four to learn, she says, but not in the way you might expect. Parents keen to introduce their 2-year-olds to Van Gogh, Picasso and the rest may have to be patient – the children Hackett observed did not appear to learn about the artworks, but “they were actually learning about the place itself.” She explains: “The way in which they move their body in a place produces a particular experience of that place, which is actually the thing they’re taking away.”

“Galleries are essentially places for looking – and looking quietly,” says British art historian David Buckman. “Obviously, people need to talk quietly, maybe to discuss something seen, but this is best done without children running about and shouting, mobile phone conversations, intercom messages taken by invigilators, and so on.”

Arts journalist and parent-of-two Nico Kos Earle disagrees. “The open spaces often found in museums are like a rally call for children – they demand to be covered with speed like an open field,” He describes how taking his young children to galleries in Paris where the family was “chastised so often that we gave up going altogether.”

How well children and art galleries mix has been much wrangled over in recent weeks, following British artist Jake Chapman’s comments that taking children to them is a “total waste of time”. Never a stranger to controversy, Chapman described parents who thought their children could understand complex work such as that of Jackson Pollock as “arrogant”.

Chapman’s comments come at a time when taking children to art galleries and museums has become increasingly popular in the UK, where a report  in 2011 showed visits from children to government-sponsored institutes rose by 36% (2 million more children) in 10 years since the introduction of free admission to national museums. And groups such as Kids in Museums campaign for better integration of little ones in these spaces. 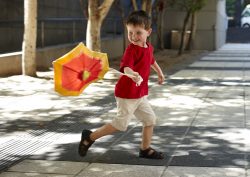 Holiday program at the Immigration Museum, Melbourne. Source: Museum Victoria
Positions Vacant » View All
» Visitor Engagement Admin Officer – HTSA
» Learning Specialist – AWMM
Latest News » View All
AG Env Min Pliberseck backs World Heritage
listing of Parramatta Female Factory Read more.
NMA acquires historic colonial billiard table
illustrating Aust history in timber Read more.
AWM’s Nick Fletcher discusses tank warfare
& practical origins in The Battle of Cambria Read more.
The future viability of platypus populations
- fragmentation by major dams & implications Read more.
Ntl Geo on WAM & Shipwreck Hunters Australia
- why WA’s coast rivals the Bermuda Triangle Read more.
Top +
Council of Australasian Museum Directors c/o Mr Brian Oldman, South Australian Museum PO Box 234 Adelaide, South Australia 5001 Australia, © CAMD 2022
Copyright: All information and resources provided on this website remain the copyright of the Council of Australasian Museum Directors. Permission is granted for viewing and downloading for personal and not for profit purposes. Those wishing to reproduce any materials for commercial, educational or other uses are requested to contact us.
Disclaimer: The content of this website is provided for information purposes only and is not intended as a substitute for professional advice. No claim is made as to the accuracy or authenticity of the content of the website. The Council of Australasian Museum Directors does not accept any liability to any person for the information or advice (or the use of such information or advice) which is provided on this website. The information on our website is provided on the basis that all persons accessing the site undertake responsibility for assessing the relevance and accuracy of its content. No responsibility is taken for any information or services which may appear on any linked web sites. Hostgator.
.