You are here: Home » Articles filed under: 'News' » Article: 'Runway successes – the appeal of'

Runway successes – the appeal of 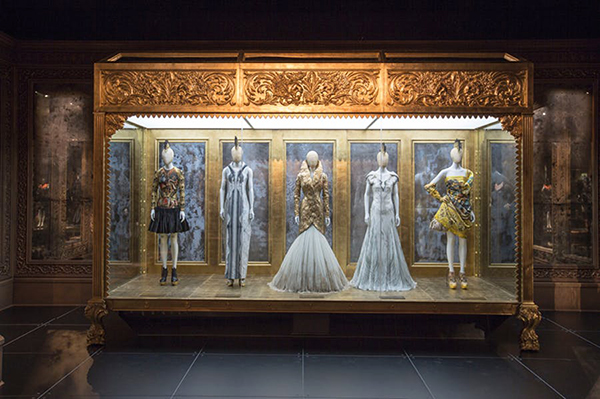 The Dior exhibition in the new Sainsbury Gallery at the Victoria & Albert Museum (until 1 September) asks visitors to do something of a double-take at the start. In the brightly lit entrance, the famous Bar suit with its sculpted jacket and full, pleated skirt stands by itself in a glass case, draped on a mannequin topped by the equally familiar lampshade-shaped hat. To the left of the case is a set of framed sketches made by the designer in 1947, the year of his first solo collection; to the right, a wall of personal ephemera: postcards, letters, and photographs. But this opening is a feint – the isolated suit stands in front of a mocked-up façade of 30 Avenue Montaigne in Paris, home of the house of Dior, with four more mannequins standing in or in front of windows. Once through the arch, we begin again, plunged into a black-walled space, with a series of spotlit creations guiding us through; a bracing alternation of dark and light spaces then continues until the end. The exhibition, the design makes clear, is not a pedagogic trot through the work of an important haute couturier; it is an experience.

The Mary Quant exhibition, also at the V&A (until 16 February 2020), is, as one might expect, a more modest affair. In the Octagon Court, the museum’s dedicated space for fashion exhibitions, we are confronted with several series of outfits behind glass. As with every show I’ve seen in the split-level gallery since it was redesigned in 2012, downstairs feels slightly cramped – with a few sharp turns and films that sometimes compete with the static displays; then there’s the usual sense of release as you get to the spacious uplands of the mezzanine level – and a neat curatorial flourish as the story gets to more liberated times: the mid 1960s and the arrival of the mini-skirt.

On the afternoon of my visit, both shows are sold out. Three weeks after it opened the Dior show had sold all pre-bookable tickets for its entire run, prompting the V&A to extend the exhibition by seven weeks. It seems in with a good chance of outdoing ‘Alexander McQueen: Savage Beauty’, which attracted more than 490,000 visitors in 2015 and was open through the night for its last two weekends. ‘Savage Beauty’ had its first outing in 2011 at the Metropolitan Museum of Art, where it had more than 660,000 visitors, but has since been overtaken in popularity by ‘Heavenly Bodies: Fashion and the Catholic Imagination’, which, the museum reports, was seen in 2018 by more than 1.6million people. In box-office terms this puts it ahead of both the Mona Lisa’s three-and-half-week visit to the Met in 1963 and the legendary Tutankhamun exhibition of 1978.

The opening of the Met’s spring fashion exhibition is always preceded by the annual fundraising gala for its Costume Institute – an opportunity for much greater sartorial excess than the Oscars could ever allow (think Sarah Jessica Parker with silk flames bursting from her head in 2015 or Rihanna in a bejewelled bishop’s hat in 2018). The theme of this year’s exhibition – ‘Camp: Notes on Fashion’ – is inspired by Susan Sontag’s Partisan Review essay of 1964, but its translation to the red carpet may be as interesting as the show itself.

All the hoopla of record visitor numbers and media-friendly gala events, and the lavishness of the best-funded shows themselves, however, obscures just how recent these high-profile temporary exhibitions are, even in the field of fashion. The Costume Institute was founded in 1937 by Irene and Alice Lewisohn as the Museum of Costume Art. It operated as a semi-autonomous part of the Met between 1946 and 1960, until it was absorbed into the museum as a curatorial department, but with no sense that anyone there knew what to do with it – until Thomas Hoving became the director in 1967 and his chief curator Theodore Rousseau had the brainwave of suggesting Diana Vreeland be hired as the Costume Institute’s ‘special consultant’, a role she took up in 1973 and held until her death in 1989. Her appointment marked both the end of her long and influential career in magazines – she had joined the staff of Harper’s Bazaar in 1936, and had just been pushed out as the editor of Vogue – and also the end of an era in haute couture. Her first exhibition at the Met was devoted to Cristobal Balenciaga, who, in 1968, had closed his Paris atelier – sensing, perhaps, that his brand of personal craftsmanship was no longer suited to the times. Vreeland secured loans from her society friends (some of whom were covering part of her Costume Institute salary), insisted on specific lighting effects, hung paintings by Goya, Velázquez and Picasso on the walls (cannily anticipating the Museo Thyssen-Bornemisza’s upcoming show, ‘Balenciaga and Spanish Painting’, by nearly half a century), and made her centrepiece a suit of Spanish armour. More outlandishly, she had the galleries sprayed with Balenciaga perfumes several times a day.

It was not Vreeland, however, who was the pioneer of the modern blockbuster exhibition, but her contemporary, the photographer, costume- and set-designer Cecil Beaton. In 1969 Beaton proposed to John Pope-Hennessy, the then-director of the V&A, an exhibition of the ‘best of women’s fashion today’. The result, ‘Fashion: An Anthology’, of 1971, was only the second exhibition of modern fashion the museum had ever held (the sections devoted to clothes in ‘Britain Can Make It’ in 1946 count as the first). Beaton spent two years collecting the exhibits from donors – many of them friends he had known and photographed for years – and, as the museum’s accession numbers attest, the core of its haute-couture collection stems from this period. In their book Exhibiting Fashion: Before and After 1971, the dress historian Amy de la Haye and exhibition-maker Judith Clark make a compelling case for the Beaton show as marking a turning point for collecting and displaying fashion in the museum.

Vreeland was undoubtedly influenced by Beaton’s success, but less respectful of scholarly and museological considerations. In October 1972, seven months after Balenciaga himself had died, she wrote to her old friend: ‘I am now beginning to wonder how you ever put your show together’ (quoted in Amanda Mackenzie Stuart’s excellent biography of Vreeland). A thoroughly entertaining New Yorker profile from 1975 implies that her methods may have been maddening (but perhaps also diverting?) for the professional curators who had to carry out impressively vague yet intensely demanding instructions to her satisfaction.

Nearly half a century later, it seems that the Beaton-Vreeland legacy in the museum, and at the V&A and the Met in particular, is the fashion exhibition as immersive theatre. It’s an approach that seems to have reached its culmination in the recent Alexander McQueen retrospective – easily the most spectacular experience I’ve had in any museum. The obvious drawback of any costume exhibition is that the visitor is deprived of one of the most important aspects of dress: the exhibits can be neither seen nor felt on the move. All the effects that mise en scène can muster (depending on the budget) can distract from this fact but not make up for it. There’s an added irony in that the more work that goes into a garment, the more important how it feels to wear becomes. The Jean-Paul Gaultier exhibition at the Barbican in 2014 couldn’t get round this recurring problem, but the labels for each couture outfit helpfully stated how many hours had been spent on its creation (although not how many hands had been involved).

If spectacle becomes the standard that visitors expect – and that museums rely upon to pull in visitors – having to work so closely with multimillion dollar fashion businesses and the archives they own can come with its own disadvantages. Christian Dior the man was head of the house that carries his name for only 10 years, until his early death in 1957. The V&A’s exhibition (which had its first incarnation at the Musée des arts decoratifs in Paris) is just as much about the afterlife of the brand. Fashion houses with a history are now thoroughly aware of the value of their archives – using them to ground the efforts of their present-day head designers, sometimes with claustrophobic effect. It’s striking in the ‘Designs for Dior’ section that of the six creative directors whose clothes are on display, it is the work of the 21-year-old Yves Saint Laurent that stands out for being unafraid to strike out into new territory – and not being subject to the tyranny of the Dior wasp waist. (Judging by the documentary Dior and I [2015], in which he looks thoroughly miserable except for a moment at the end, the weight of history seems to have got to Raf Simons, who left after just three years as creative director.)

The challenge for the curator and the exhibition designer – and the appeal of the dramatic approach – is to avoid any sense of playing shop. The overlap with the commercial, the risk of confusion with commercial spaces (what Judith Clark has called ‘dangerous territory’) is always lurking when the house is not just part of the historical record. ‘Savage Beauty’ succeeded on several levels, because it seemed so determined to recreate the effect of Alexander McQueen’s ground-breaking catwalk shows. (In a curious looping effect, the footage of those shows in the 2018 documentary about McQueen seemed like a reminder of the exhibition.) And things have come a long way since Diana Vreeland curated ‘Yves Saint Laurent: 25 Years of Design’ – and was criticised for giving a living designer so much free publicity. There were, of course, other criticisms to be made of her curating, including an extremely breezy approach to history, which Roy Strong criticised head-on when he wrote in The Times in 1983: ‘The thing that unites the [V&A’s] textile department is a deep loathing of what is being done at the Metropolitan Museum in New York.’