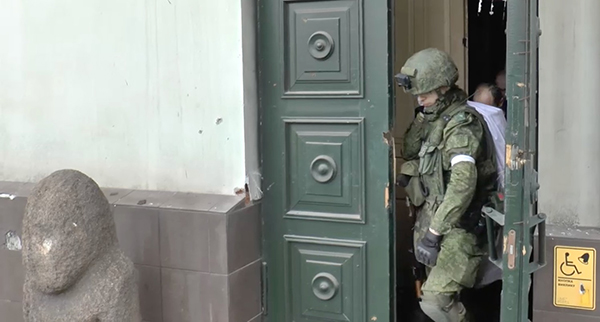 A curator has been kidnapped and thousands of objects seized by Russian forces during their occupation of the Ukrainian cities of Mariupol and Melitopol, according to local reports.The caretaker of the Museum of Local Lore in Melitopol, Leila Ibrahimova, told the New York Times last week that Russian troops bearing machine guns had stolen 198 items from the institution, including several 2,300-year-old gold pieces dating from the Scythian empire.

The museum holds “one of the largest and most expensive collections in Ukraine”, according to Melitopol’s mayor Ivan Fyodorov.

The objects were reportedly selected by a man in a white coat with “long tweezers and special gloves” who broke into the basement of the museum with a group of Russian soldiers.

Staff had attempted to conceal much of the collection in a cellar but the hiding place was discovered. A curator who reportedly refused to disclose the location of the items, 60-year-old Galina Andriivna Kucher, was released following the raid but subsequently kidnapped on the night of 30 April, according to a Facebook post by activist Eskendar Bariiev, who said her whereabouts remain unknown.

In the besieged city of Mariupol, the city council has described how the “occupiers have ‘liberated’ Mariupol” from its historical and cultural heritage.

In a post on Telegram, the council said the “ruscists” – a Ukrainian term combining Russian and fascist – had stolen “more than 2,000 unique exhibits from the museums of Mariupol” and brought them to Donetsk.

A Torah scroll was among the objects looted from museums in Mariupol.

These include original works by the 19th-century artists Arkhip Kuindzhi and Ivan Aivazovsky, a handwritten Torah scroll, a gospel from 1811 created by a Venetian printing house for the Greeks of Mariupol, and more than 200 medals from the Museum of Medallion Art Harabet.

The medals were the work of artist Yukhym Harabet and had been donated to the museum by his wife, artist Svitlana Otchenashenko-Harabet, who died during the siege of Mariupol in April.

The city council says it is “preparing materials for law enforcement agencies to initiate criminal proceedings and appeal to Interpol”.

The city’s local history museum has also been destroyed by bombing, according to reports. Around 100,000 civilians remain trapped in Mariupol as the humanitarian catastrophe there worsens.Ukrainian museum professionals told last week how “state-organised looting” was part of Putin’s invasion strategy and said Russia was intent on committing “genocide” to erase the distinct cultural identity of Ukraine.

Correction 04.05.2022: The lead image was previously identified as the Museum of Local Lore in Melitopol. In fact it is a museum in Mariupol.