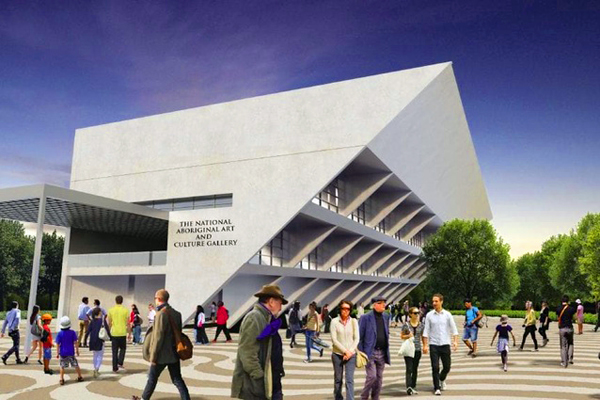 An indicative design for the National Aboriginal Art and Cultures Gallery released by the then-Liberal opposition in the lead up to the March 2018 election.

The South Australian government is pushing forward with its plans for a National Gallery for Aboriginal Art and Cultures at the site of the old Royal Adelaide Hospital.

The proposed gallery, which has been favoured by the Liberal government since before the 2018 election, will take the place of the mooted Adelaide Contemporary gallery – a project pushed by the previous Labor government.

Premier Steven Marshall said a National Gallery for Aboriginal Art and Cultures would “make Adelaide the centre for Indigenous art and culture nation-wide.”

A scoping study, for which $200,000 was allocated in the 2018/19 state budget, will now be undertaken by Pricewaterhouse Coopers.

Marshall said his government had already consulted with relevant parties and that thescoping study would progress those discussions to the next level.

“At the end of this, we will have a clear vision of the scope and size of the project, and how we as a government can best collaborate with the Indigenous community after the completion of the gallery, to ensure its ongoing success,” he said.

“This gallery will be the first of its kind in Australia and will allow us to properly recognize and celebrate the oldest living cultural history, which will attract both national and international attention.”

A $2 million international design competition for a major contemporary art gallery on the site, known as Lot Fourteen, concluded in June 2018. The competition was intended to inform a final business case and funding approval for the project.

The winner was Diller Scofidio and Renfro and Woods Bagot’s proposal, which featured a dramatic “super lobby,” floating “sky galleries,” a suspended rooftop garden and a performance lab.

There have been some indications that the winning design will be incorporated in some way into the design of the Aboriginal art gallery. In June, InDaily reported the premier indicated that “it might be useful in informing the design of a new institution on North Terrace.”

The Art Gallery of South Australia’s co-acting director Lisa Slade told ArchitectureAU in September 2018 she was optimistic about the prospects for the old RAH site.

“It’s not our understanding that the winning design will be discarded,” she said.

A total of $60 million has so far been allocated for the commencement of construction for the National Gallery for Aboriginal Art and Cultures. The Adelaide Contemporary project had an estimatedproject budget of up to $250 million.

Marshall said a national Indigenous gallery would also provide employment opportunities for Indigenous South Australians and would become a centre for research into the teaching of Aboriginal culture, language and history.

“Artists from many remote Indigenous communities have been enjoying international acclaim for much of their work. The National Gallery will bring this art and culture together for all to see, and turn Lot Fourteen into a hub for art and culture, as well as entrepreneurship and innovation,” he said.

In December 2018, the SA government announced the Australian Space Agency will also be based at Lot Fourteen.

The masterplan vision for the site is produced by Woods Bagot, Oculus, Right Angle Studio and Macro Plan Dimasi.