A group of Aboriginal elders is continuing court proceedings against an arts organisation over the use of an ancient songline for an exhibition and book. 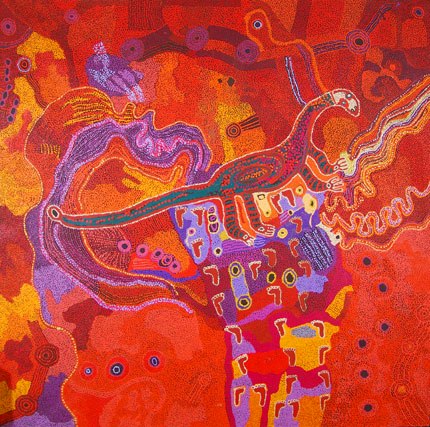 Senior men from the remote Pitjantjatjaran lands, which span from the Stuart Highway to the top of South Australia and its border with the west, objected to the use of the Ngintaka story for an exhibition and book last year, saying the use of the songline outside their camps was not permitted and revealed secret men’s stories.

It is understood three of the 10 men who initially signed up to the court challenge — Hector Burton, Mick Wikilyiri and George Kenmore — have sought to withdraw from involvement in the legal proceedings. The involvement of a further two traditional men of law — Willie Kaika Burton and Ray Ken — is also now in doubt.

The Aboriginal men are seeking damages, including the profits received through the use of the Ngintaka songline for the government-funded exhibition in Adelaide and its affiliated book.

The exhibition organisers, Anan­guku Arts and Culture Abor­iginal Corporation, have said there were 25 representative region­al and community meetings since 2009 for the show, with approval first granted by the APY Council in 1996.

The exhibition opened at the South Australian Museum in March last year, with more than 50 Anangu from the APY Lands attending in support.