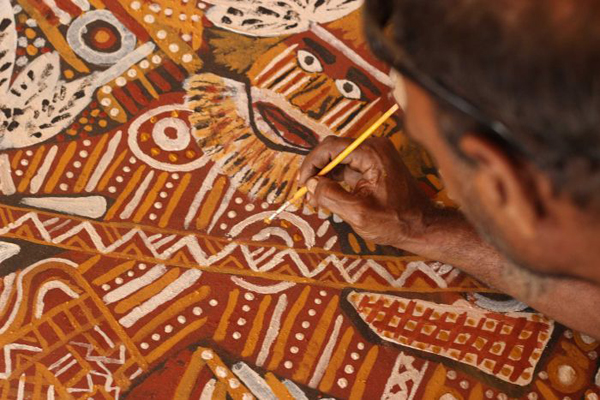 News that SA has received federal funding for a national art gallery has disconcerted the NT. (Supplied: Jack Bullen).

Is there room for two national Indigenous art galleries in Australia?

There are doubts over whether there is funding available to support two such spaces, sparking further concerns over the future of the stalled National Indigenous Art Gallery project in Alice Springs.

South Australian Liberal Premier Steven Marshall announced on Sunday that Adelaide had secured $85 million in federal funding through the Adelaide Cities deal for a National Gallery for Aboriginal Art and Cultures to be built at the former Royal Adelaide Hospital site.

Meanwhile, the Northern Territory Government’s proposed gallery has been on hiatus since January after it lost approval of traditional owners to go ahead with the project on the proposed Anzac Oval site.

“I doubt that you could replicate them in both the NT and SA and expect them to work in terms of putting together collections, getting audiences, getting philanthropic and government support,” he told ABC Radio Darwin.

A former chief executive of the Sydney Opera House and member of the previous steering committee for the proposed NT National Indigenous Art Gallery, Mr Lynch said the decision to award the Adelaide gallery funding was rushed, lacking in consultation, and appeared as if it were intended to swing votes ahead of the upcoming federal election.

“I think this smells a little more like pork-barrelling from the feds to Adelaide to try and hold the position in SA rather than a comparison of the merits of either of the proposals,” he said.

He said the Northern Territory had undergone extensive consultation for its project — the current impasse notwithstanding — but that it was unclear what the concept for the National Gallery for Aboriginal Art and Cultures in Adelaide actually was.

Notably, Mr Lynch lobbied for and chaired the jury of a design competition for an alternate project favoured by the previous SA Labor government for a contemporary gallery, similar to Hobart’s Museum of Old and New Art (MONA) to be built in Adelaide.

The SA Premier’s office confirmed that consultations for their national Aboriginal gallery began on February 6, just over a month before the $85 million in federal funding was announced.

Meanwhile, consultations for the Alice Springs gallery have been ongoing for the last two-and-a-half years, but the project has so far secured zero dollars in federal funding.

‘Nail in the coffin’

Independent Alice Springs MLA Robyn Lambley said she was concerned that millions of dollars in federal funding was flowing south rather than north to the NT.

“I’m concerned we’ve been gazumped, we’re out of the race, we are no longer in contention for the same pot of money that’s been given to the Adelaide Cities deal for their national Indigenous art gallery,” she said.

“It could be the nail in the coffin in terms of what we get out of the Federal Government.

The NT Government has committed $50 million for the gallery and is hoping the Commonwealth and philanthropists will find another $100 million between them.