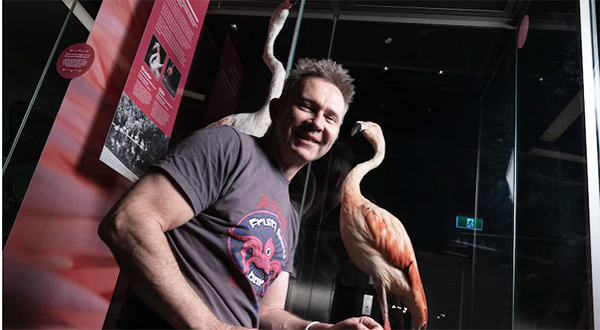 They were the last living flamingos in Australia and loved by generations of families, now, Chile and Greater have been immortalised through the practice of taxidermy.

The birds were unveiled today in the South Australian Museum‘s mammal display, drawing a round of applause from onlookers.

Chile and Greater’s former keeper at Adelaide Zoo, Emma Crittle, even shed a tear of delight.

“Getting to see them again was really lovely, and it brought unexpected joy after not seeing them for so many years,” she said.

“If you put them back in their old enclosure, it’d almost be like they were alive again.

“I did shed a few tears of absolute happiness.”

Adelaide Zoo has housed flamingos for more than 135 years, but by 1982, Greater and Chile were the last ones left.

Greater passed away in 2014 at the ripe age of 83 and Chile joined her life-long companion four years later. 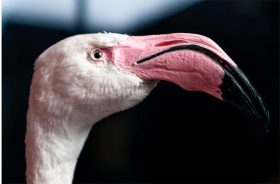 Instead of being buried, they were brought to SA Museum’s resident taxidermist Jo Bain, who kept them in his workshop freezer until the museum had raised enough funds to bring them back to life.

“My mission is the same as the zoo’s mission,” Mr Bain said.

“They want to educate people about wildlife and why it’s important. And I do too.”

Mr Bain and his assistant Rowan Moore have been intensively restoring the birds since August, but preparation began more than a year ago.

“The feathers were quite bloody and mucky, so we had to wash their feathers one by one, which was not that easy,” Mr Bain said.

When asked just how difficult preserving Greater and Chile was, Mr Bain replied: “14 out of 10”.

“They’ve very old and were particularly fragile,” he said.

“When you couple that with an aged flamingo where if you bend the skin, it breaks, then requires sewing up — it’s an added layer of difficulty.” 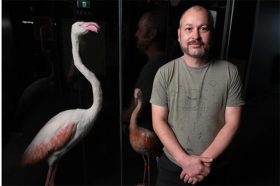 “Looking at the birds, you would not know how difficult it was, because they have done such a fantastic job,” he said.

He also thanked members of the public who chipped in donations.

“I listened to David Bevan on the morning program, and I thought, ‘Oh, it sounds like the museum needs help’,” she said.

“I had some money that I hadn’t spent on any holidays or house renovations, so I put a cheque in the post, and they’ve called me down today to have a look at them.” 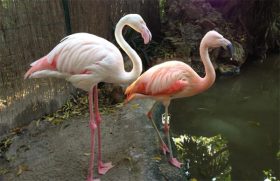 Ms Clarke-Edwards said she and her husband migrated to Adelaide in 1965, and “always remembered the flamingos at the zoo”.

“I miss them, I miss that beautiful colour. I just love that pink,” she said.

“The [taxidermy] was better than I expected. I thought it would be too hard to capture their feathers and all the ageing, but it’s just beautiful.

“It’s a gift for the next generations to enjoy.”

Posted 10 Nov 202110 Nov 2021, updated 10 Nov 2021
Positions Vacant » View All
» Project Manager, Capital Development – AWMM
» Digital Preservation Manager – AWMM
Latest News » View All
MAGNT announces Adam Worrall as new Director –
currently MD Australian Art Exhibitions Read more.
What does ANSTO do? – understanding atoms
powers nuclear and accelerator techniques Read more.
TikTok strategy creates new opps for museums
to inspire critical thinking & dialogue Read more.
Te Papa gifted ‘apei and monuma from Rotuma
- natl colln & illustrating living culture Read more.
A new frontier in fighting sexism: parasitic worms
Name more species after women, scientists told Read more.
Top +
Council of Australasian Museum Directors c/o Mr Brian Oldman, South Australian Museum PO Box 234 Adelaide, South Australia 5001 Australia, © CAMD 2022
Copyright: All information and resources provided on this website remain the copyright of the Council of Australasian Museum Directors. Permission is granted for viewing and downloading for personal and not for profit purposes. Those wishing to reproduce any materials for commercial, educational or other uses are requested to contact us.
Disclaimer: The content of this website is provided for information purposes only and is not intended as a substitute for professional advice. No claim is made as to the accuracy or authenticity of the content of the website. The Council of Australasian Museum Directors does not accept any liability to any person for the information or advice (or the use of such information or advice) which is provided on this website. The information on our website is provided on the basis that all persons accessing the site undertake responsibility for assessing the relevance and accuracy of its content. No responsibility is taken for any information or services which may appear on any linked web sites. Hostgator.
.