May 11th, 2018 | Browse other: News. | Tagged with: National Aboriginal Art and Culture Gallery, Why the Art Gallery and SA Museum must join forces | 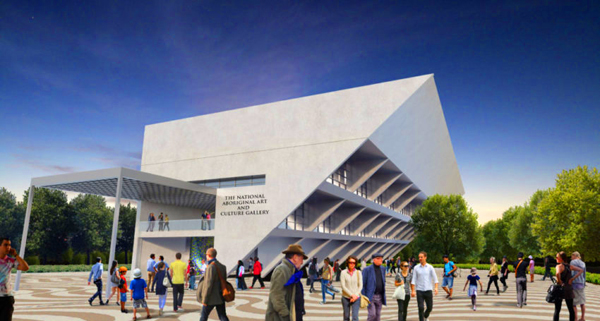 An image of the proposed National Aboriginal Art and Culture Gallery, released by the Liberals during the state election campaign.

Cillín Perera, Why the Art Gallery and SA Museum must join forces, InDaily, 8 May 2018

By setting aside any turf wars, two of South Australia’s great cultural institutions can create a new gallery that could be as transformational for Adelaide as Mona has been for Hobart, writes Cillín Perera.

In late February 2018, Steven Marshall personally announced an election pledge to build a National Aboriginal Art and Culture Gallery on the old RAH site. The then-Opposition Leader’s proposal was slated as an alternative to Adelaide Contemporary, which had been the favoured proposal of the Labor Government.

In many quarters, not least due to the ebbs and flows of state and institutional politics, this announcement and the subsequent Liberal victory have been presented as a win for the South Australian Museum (SAM) and a loss for the Art Gallery of South Australia (AGSA).

Such thinking does little to acknowledge the deep connections that exist between SAM’s remit of Aboriginal culture and AGSA’s remit of contemporary art, and distracts from an unprecedented opportunity to create the world’s foremost institution for the telling of the complete story, from past to present, of an entire genre of art.

The vast majority of Aboriginal art as we know it is contemporary. Evolving from the first ‘dot painting’ on durable materials created in the 1970s, this movement is now continent-wide. From the larrakitj and yidaki of northern Arnhem Land and the lino-cut prints of far north Queensland, to the urban art of the capital cities, the genre is as rich and varied as any in the world.

An enormous breadth of this work is represented in AGSA’s storerooms, which contain more than 1500 works. SAM’s crown jewels of more than 30,000 artefacts, housed in a leaky industrial building at Netley, round out the story’s foundations.

Only after viewing a ceremonial shield collected in the 1800s does a 2003 George Tjungurrayi fully come to life, with SAM’s collection allowing AGSA’s to shine. Art history works this way – the short four decades of Aboriginal art on the contemporary scene were a long 40,000 years in the making.

However, just like an arbitrary colonial border fostering a territorial dispute, lines drawn in the sands of academia have divided a subject that should be viewed as a whole.

The only way to display these collections and to tell this story is for AGSA and SAM to work together.

Australia has yet to establish a national Aboriginal arts or cultural institution. Interest has been expressed in other states but the cornerstone of any gallery will be its collection, for which Adelaide has the strongest case.

A big part of SAM’s world-leading vision is to create an open-storage archive, empowering communities to access their culture, feeding the roots of the art movement, and setting a powerful example to the nation of repatriation and reconciliation.

Such proposals don’t exist in a vacuum. Not only are we morally obliged as a nation to come to terms with Aboriginal reconciliation, but there are increasing pressures to acknowledge indigenous peoples globally.

The potential flow-on from cultural tourism opportunities is more promising than ever. With worldwide tourist arrivals increasing 4-5 per cent annually, the European Commission reports 40 per cent of tourists choose destinations based on cultural offerings. The Australia Council has found cultural visitors spend twice as much money, with international tourists 10 times more likely than locals to visit Aboriginal art or culture displays, and five times more likely to visit Aboriginal sites or communities.

Recent exhibitions of Aboriginal material have generated exceptional interest abroad, including Harvard Art Museums’ seven-month, 70-work ‘Everywhen’ survey, and the US tours of ‘No Boundaries’ and ‘Marking the Infinite’. This increased exposure also feeds the collector market, with a recent $2.1m Emily Kame Kngwarreye result and a dedicated Sothebys auction in London which this year forwent the customary Australian preview, deeming European interest sufficient.

What this reveals is a world open and ready to embrace our Aboriginal story. This story is unique to Australia; the story of an ancient culture becoming contemporary, the survival of traditional ways when exposed to modern times. Unlike the ruins of Rome or the plunder of Egypt, it is a story that is alive and kicking. And between the collections of SAM and AGSA, we are blessed with the tools to tell and nurture it.

The Australian National Aboriginal Art and Culture Gallery can do all the good for Adelaide that Mona did for Hobart – but only if we hold bold in our vision. Progress will be made neither by yearning eastwards and seeking to copy, nor by fighting internal turf wars, but by using fresh eyes to acknowledge the cultural assets in our care and using these to confidently hammer out, together, a groundbreaking new place in the future.

Cillín Perera is a Harvard-educated Australian expat entrepreneur, philanthropist, photographer and art collector. He is a benefactor of the South Australian Museum and owner of nthspace Adelaide.