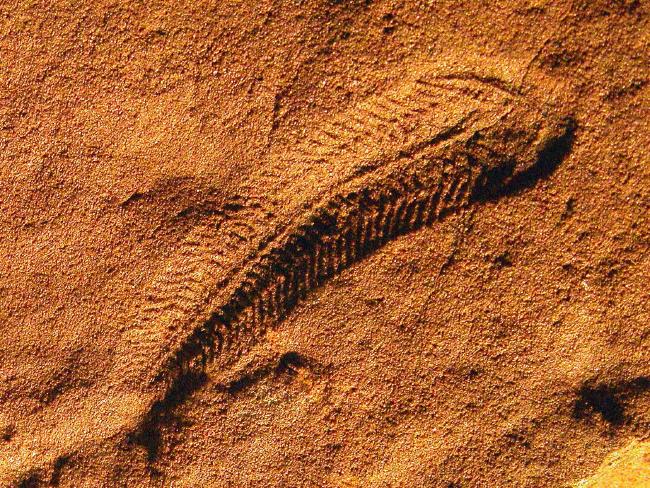 A fossil of the Spriggina. Source: The Daily Telegraph.

Sir David, who was in Adelaide on Tuesday to present his live show A Quest for Life, said the Spriggina’s fame and importance made it a “very fitting” emblem.

“The Spriggina is one of the first known animals to have lived on Earth,” he said. “Its head and segmented body suggest that it may well have had a rudimentary brain, making it, perhaps, the earliest evidence of intelligent life in the history of our planet.”

More than 3500 South Australians cast their vote for a fossil to become the state’s new emblem in an online poll.

The 550-million-year-old fossil was chosen for best representing the state’s geological and scientific prowess.

It was the first animal with a bilaterally symmetrical body, meaning its left and right sides form a mirror image.

Sir David visited the Ediacara Hills in the Flinders Ranges in 2009 to see the treasure-trove of fossils for himself.

The Spriggina has also appeared in his Life on Earth series, and in 2013 he was given a behind-the-scenes tour of SA Museum’s Ediacara fossil collection.

SA Museum’s senior research scientist Professor Jim Gehling said that since Sir David’s first visit to the museum’s collection of Spriggina fossils in 2011, it had increased from 10 to around 300.