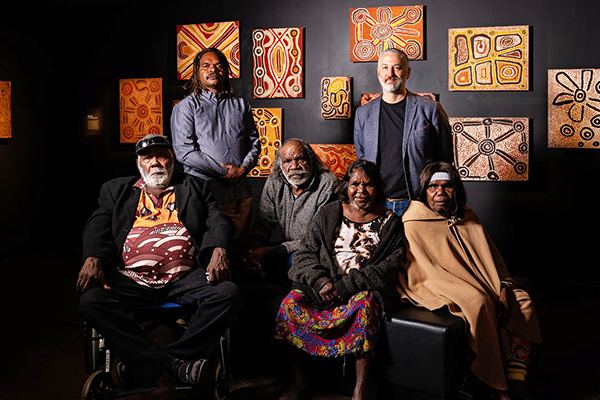 “Now everyone can see where the Balgo story started”: Balgo artists with John Carty at the South Australian Museum exhibition. Photo: Brad Griffin.

Important paintings lay forgotten in storage since the early 80s until their discovery, muddy and mouldy, but intact.

Balgo is Country for all of us now. We were all born here, these generations here today. We are Wirrimanu kids. We belong to Balgo. That’s what we paint. That’s why we paint. This is our story.”
– Warlayirti artist Eva Nagomarra

John Carty opened his email and downloaded the images. They were photos of paintings, found in a shipping container somewhere in the Kimberley. They were muddy and water damaged, but recognisable.

Carty admits he cried on that day in 2019. He had been looking for those paintings for 20 years.

The story of how the Balgo paintings were found is vague, as is the story of how they were lost. A guy (unnamed) started unpacking a container he’d had for a while, to see what damage recent flooding had done.

There were paintings inside. He called a couple of mates, people who knew something about art, to take a look at them. Those mates had a glimmer of recognition. Then there was a phone call to the authorities, and an email with pictures of the paintings was sent to the city, to Carty, the Balgo expert. 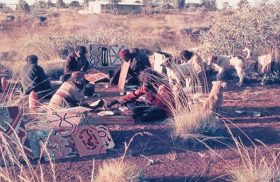 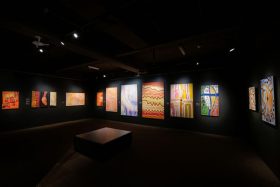 It was the lost Balgo exhibition. The paintings representing what would become one of Australian art’s most important movements had been stored in the early 80s, with the intention of putting them on display for the first time. But opportunities for relatively unknown artists were scarce. The art got packed away, forgotten in a corner of the Kimberley – until about 40 years later, when it emerged, muddy and mouldy, but intact.

Balgo (Wirrimanu) is a remote Aboriginal community on the edge of the Great Sandy Desert in Western Australia. Population: about 400.

The art movement born in Balgo has rippled across Australia, so even if you haven’t seen Balgo art, you’ve probably seen its influence.

Carty is now head of humanities at the South Australian Museum. But at the turn of the century he was trying to work out what to do his PhD on. He was studying anthropology at the University of Melbourne, but on his way to Canberra he picked up an in-flight magazine.

“I was just looking at these unbelievable paintings … these paintings from Balgo that just had this incredible presence. It was a moment of revelation, some kind of shift in my thinking about Australia, and I really wanted to go there and understand those artists,” he says.

So he wrote to the Balgo artists, and asked if he could volunteer at the art centre. He ended up staying for three years in the tiny community. 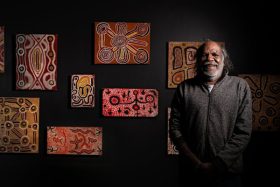 Gary Njamme was a teenager when he began painting with the old men. This was the first time in 40 years he had seen hist first paintings. Photograph: Brad Griffin.

He has a photo from Balgo. It was taken in 1982, a couple of decades before he got there. A couple of camp dogs look on as men sit among the spinifex, painting for that first, fated exhibition of Balgo art. The faded colours of the photo belie the vibrancy of the desert ground, and the paintings themselves, propped up in the sunshine.

These are the 1982 paintings that went missing, and the photo is how Carty knew what he was looking at when he saw them again in 2019.

In between lies the story of the Balgo artists.

In his book Balgo: Creating Country, Carty relays how the first Catholic missionaries came to the area and asked what the place was called. “[Community elder] George Lee Tjungurrayi said: ‘The old people thought they were pointing at the grass! That grass was called parlku. So they said to Father, parlku. And Father went and called the place Balgo.’” 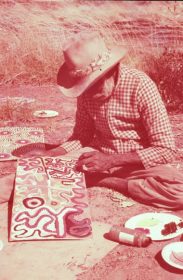 In the 1960s, the mission was moved to a more hospitable spot nearby, but kept the name. In the late 1970s, following their families who lived at Papunya, Balgo people became interested in painting. In the mid-1980s, the Warlayirti Artists Aboriginal Corporation was founded, and the movement’s influence grew.

Warlayirti artist Eva Nagomarra says people came from all around to paint at Balgo.

“In the early days we did painting. Cultural way. For ourselves … we did a lot of landscapes at the start. Then after that people did a lot of paintings for the church. Then we decided we gotta do our own painting now. About ngurra and tjukurrpa. Ngurra are the places we came from, our Country. We came to the mission from Kiwirrkurra, from Canning Stock Route, from Mulan Lake Country. All the different families. All now to this Country we call Balgo.

“And we have always enjoyed our culture. We never stopped. Always dancing and singing, teaching our kids and keeping our culture strong. Here in Balgo. We keep our ceremonies, we visit our Country. That’s why we still live here. That’s why we paint. That story from our Tjamu and Tjatja [grandfather and grandmother]. Our rockholes and waters where we used to live. We paint that. Our bush tucker and lovely bush potatoes! We paint that. Balgo is Country for all of us now.”

But when Carty arrived, he knew there were pages missing from the Balgo origin story.

“The story was always unsatisfying, vague,” Carty says. “And that photo … we knew those paintings were out there somewhere.”

Had they been thrown out? Picked up on the cheap? Tucked away somewhere?

“They weren’t in public collections … I searched for them, and I never gave up hope, I felt like they were out there somewhere,” he says.

“But it felt like those early pages of the Balgo story had been kind of ripped out and [there was] this vague mythology of how the painting started.”

The Balgo artists went on, creating ever more vivid and colourful works, building on the famous movement. Carty went on to work in museums. And then the shipping container turned up.

“I clicked on these thumbnails in my inbox, and the images came up, and they were the images of those paintings that were in the spinifex surrounded by the men. I knew all of them. They were all burned into my mind because I’d been hoping to find them one day, and so I just had to cross-reference that photo,” he says.

“They’d been in this time warp, this shipping container for 40 years. In a black hole. Then they’ve been spat back out by the universe.”

The works were smeared with mud, mouldy shadows across the dots and curved lines, the stories the paintings tell. Carty gathered them up, wrapped them “in his socks and jocks”, he says, and brought them to the SA Museum. 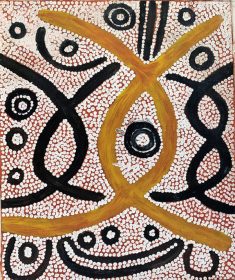 Cultural conservators from Artlab Australia went to work, doing their best to restore the artworks.

There was one of the paintings Sunfly Tjampitjin had done in 1982, a curl of dark around the bottom. Gary Njamme’s work of bright clear colours, just clouded down one side. Alan Winderoo’s work, with just a hint of a vague shadow.

“They did a really beautiful and extraordinary thing in restoring those paintings, as close as can be to the original state,” Carty says. And while he thinks origin stories are important, he says there’s a danger in fetishising the past.

So he went back to Balgo, to the children and grandchildren of the original artists, and asked if they wanted to paint in response to those first paintings. 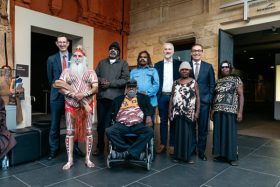 In the exhibition Balgo Beginnings, the found paintings hang alongside the new. Pauline Sunfly hangs alongside her famous father Sunfly Tjamptitjin; Jimmy Tchooga alongside his grandfather Alan Winderoo.

Carty’s book traces the evolution of the art as the people are buffeted by colonisation, the cattlemen, the missionaries and the political, cultural and economic upheaval they brought. And it has all those missing pages, back where they belong.

“[People] don’t know that story, they only know the new paintings. Our beginnings got lost,” senior Balgo artist Jimmy Tchooga says. “Now everyone can see where the Balgo story started.

“I was happy to see my tjamu [grandfather] Winderoo’s first painting. I know that place, but never seen painting like that. So it gave me [the] idea to paint. I painted a new way, old way, but new again.”