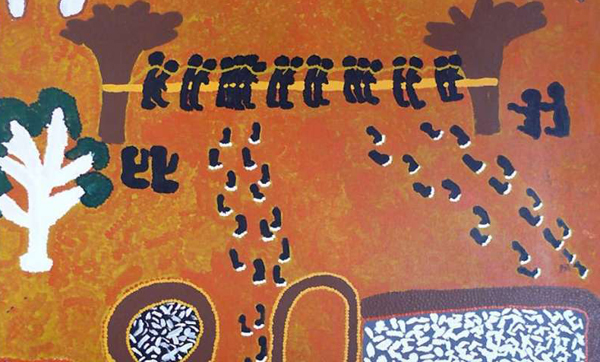 For almost a century, the people of the Kutjungka region of WA have passed on the testimony of massacres of their ancestors at Sturt Creek.

Working with oral testimony of the descent group, which originated from a sole adult survivor of the massacre, archaeological surveys defined two distinct sites containing thousands of bone fragments.

In a world first, X-ray diffraction analysis of bone fragments has been used to interpret a massacre site. The analysis, conducted by CSIRO, confirmed the fragments had been subjected to high temperatures.

“The oral testimonies were that people were shot and burnt,” says Dr Pamela Smith from Flinders University Archaeology.

“The XRD analysis from CSIRO provided the key evidence, because those bone fragments had been subjected to intensely hot fires over a very long time.

“There had to be people there maintaining those fires and temperatures for a long period. That was the evidence of human intervention.”

It was concluded that there was strong pathological and archaeological evidence that the bone fragments were human in origin, but that the evidence was not conclusive.

The results of the investigation are outlined in the paper ‘Scientific evidence for the identification of an Aboriginal massacre at the Sturt Creek sites on the Kimberley frontier of north-western Australia’, published in Forensic Science International.

Co-authors of the paper published in Forensic Science International are Dr Pamela Smith and Professor Donald Pate from Flinders University, Dr Keryn Walshe from South Australian Museum, and Professor Robert W.Fitzpatrick and Mark Raven from CSIRO Land and Water. The project was funded by a grant from the Australian Institute for Aboriginal and Torres Strait Islander Studies awarded to the Kimberley Land Council.

The methodology used to undertake the project brought together three systems of knowledge: the oral testimonies of the descent group originating from a sole adult survivor of the massacre; historical research and scientific research.

More information: Pamela A. Smith et al. Scientific evidence for the identification of an Aboriginal massacre at the Sturt Creek sites on the Kimberley frontier of north-western Australia, Forensic Science International (2017). DOI: 10.1016/j.forsciint.2017.08.018